The greatest disaster that ever befell planet earth.

The woman’s emotions were evoked, overriding her common sense. The mountain of evidence proving God’s wisdom and love and His warning melted away like butter in the sun.

All at once something shocking happened within her spirit: good is exchanged for evil. She rejects God’s perspective and follows the devil’s lie. All at once she sees the tree through different eyes and comes to the conclusion that:

She was misled and was gripped by desire. The tree that had been, a short while before, merely attractive, suddenly became desirable, but she desired something which she did not need. God had seen to it that all her needs were fully met.

The Garden of Eden had only one law: “From a certain tree you may not eat,” and she did not need to be a judicial expert to keep it.

She desired something of which she had heard, but she did not really understand what it was or how it operated.  Fleshly desire dominated over logical consideration and weighing up of the pros and cons.

She picked some of the fruit and ate it.

It seems as if she did not only eat one fruit but ate more than one. Possibly, after she had eaten one without suffering any bad consequences, she decided to eat more. 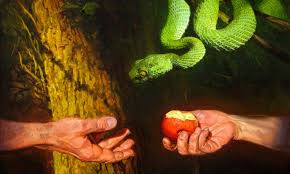 She gave some of the fruit to her husband and he ate it.

It further seems as if her husband was not nearby when she conversed with the snake. Apparently, he only arrived later on because the Bible says that he was not misled by the snake but that the woman was (1 Tim 2:14).

Because the fruit was offered to him by someone he knew intimately, he relaxed his watchfulness/guardedness. When he saw that she was eating the forbidden fruit without any ill consequences, he cast overboard the warning of the Lord his Creator, took the fruit from her hand and ate it.

Marriage partners that love and trust one-another, can very easily be drawn into sin, the one by the other. (Once my wife and I got born again, we came to an agreement that if one of us would drift away from the Lord, the other one would not go along, but stand firm and try to win the backsliding one back to God and I know of more than one occasion when I was dodging God’s perfect will, that my wife took a stand for the Lord, opposing me. I did the same. That is one of the reasons why we are still following the Lord Jesus side by side. We firstly belong to God and then to one-another.)

The first look at a forbidden thing usually cannot be helped, but the second look is your own choice. When you decide not to look, the power of the temptation is immediately broken and you walk away a free man/woman, but stealing a second look, is a step towards bondage.

I had a dog that could not resist the temptation of catching chickens. After two thrashings, he had however learned his lesson and when he walked with me and we encountered a chicken in the street, he would immediately move over to the other side of the road and turn away his head so as not to see the chicken. He had learned the danger of the second look; it causes the blood to boil and the boiling blood causes the mind to stop functioning.

When you face temptation, the devil is standing right behind you with a pair of handcuffs and the moment you succumb, he slaps them onto your wrists, and you become his prisoner as regards that sin.

Secondly, a person falling into sin, is always looking for others to join him for in their doing so, his conscience is pacified, and he feels that if others participated, his deed could not be all that wrong.

The terrible price of knowing evil

They already knew what goodness was for they were created good and had experienced “good” all the time. Now they wanted to know what evil was, but the only way to get to know that, was to experience it.

If a person had never been drunk, and a drunkard explains to him what it feels like, will he really understand what it is to be drunk? No, he will have to take the bottles of beer and drink them until his head spins, then suffer the after effects; only then will he really understand but then he may want it again and again, becoming addicted to it and suffering the consequences.

Adam and Eve had to open their lives and let evil enter into them like beer, to be able to know it; but, but, but once evil had entered in, there was no turning back, evil had come into mankind forever. Sin had entered their flesh. It was like a deadly poison, like arsenic; you can try it, swallow it, but that will be your end.

Let us think of another illustration. A person may stand on a very high building, wondering how it would feel to fall through the air, “Oh the freedom of it,” but once he has taken the decision and stepped over the edge, there is no possibility of changing his mind and stepping back onto the safety of the roof. Within second he will pay with his life.

They were hoping for an even better life, a more exciting life, than what God had given them but what they received was an ugly, angry, vicious animal that had come to live in the caves of their hearts forever. It has a body. The apostle Paul calls it a body of death (Rom 7:24).  Its food is man’s physical and spiritual life.

A great gulf had suddenly come between these two people. They were no longer one. They were like strangers. They were afraid and ashamed of one another. Adam was ashamed and scared of his body being seen by Eve and vice versa. They saw that their naked bodies would kindle ugly lust in one another and therefore tried to cover their nakedness.  They realized that they had no power to resist the sin within them, so they tried to cover it from one another’s eyes with fig leaves. They were even more scared and ashamed of God, so they hid amongst the trees.

Their eyes were indeed opened as the devil had said they would be, but this brought them no advantage. They gained nothing and lost everything: firstly, their innocence, purity and clean conscience.

By choosing to disobey God they rejected Him as their God

When they ate from that tree, they went against the will of God, demonstrating that they did not trust Him as a loving God and Father.

They chose to rather use their own intellect to acquire what they considered to be best for them.  They drew their crosses behind their own names. In other words, they did not want to be dependent on God.

The heart of sin is not the desire to be bad, but the desire to be independent. The unconverted man slaps his fist against his chest and says, “I am my own God. I will choose as I like. Sometimes I will choose to do good things like working hard because I will benefit by it. But, to keep my eyes on God every second of my life and only do what pleases Him, no ways, that I will not do.”

By choosing against God, they also chose the devil to be their father, whom they would obey.

In John 8:44 we read that Jesus said to the Pharisees that the devil was a liar and that they were his sons. This is a shocking truth: by biting into the forbidden fruit, they changed fathers; suddenly the devil became their father by their own choice.

A human being can never really be without a master; when he chooses to be independent from God, making his own decisions, he unknowingly accepts and serves the devil.

The difference between testing and tempting

Let us, by the way, take note that giving them a choice was not the same as leading them into temptation; God never does that (James: 1:13-15)].

How could they have been so foolish?

What a pitiful day that was; I wonder if not a shudder, like an earthquake went through the Garden?

We will never be able to answer these questions; but deep in our hearts we know that if we had “stood in the shoes” of Adam and Eve, we may well have done precisely the same.

Their inner deterioration was becoming worse and worse like that of a corpse decaying. It was to this inner death that God had referred when he warned them that they surely would die if they ate from the Tree of Knowledge of Good and Evil.
Secondly their bodies would also deteriorate and eventually  die and return to the dust of the earth.