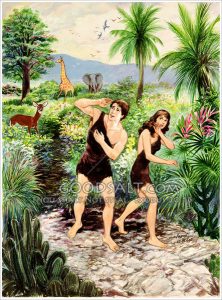 A. GOD REACHES OUT TO FALLEN MAN

The Lord God called out to Adam enquiring where he was.
He knew that they needed help urgently. On their own, they could not climb out of this pit into which they had plummeted.

The omniscient God knew exactly where they were hiding but He did not want to act like a police officer, finding them, then dragging them out from under the trees. He took the initiative by calling out to Adam but wanted them to respond to His call and come out to Him of their own free will.

Even today, the Lord is still walking through His broken garden, this world, searching for people who are hiding from Him. Some hide away because they enjoy sinning; others because they fear God’s judgement. They hide behind fig leaves such as a pretense of purity, but these leaves are always tearing, leaving them ashamed when their sins are exposed. When they die, the last leaves of pretense are stripped away, and they stand naked before God from Whom they had been fleeing throughout their lives.

Adam eventually answered, saying that he was hiding because he was naked and frightened.

To talk to God about one’s sins is humiliating, but it is the right thing to do; it is a step in the right direction of being saved from our guilt.

B. A COURT SITTING IS CONVENED, AND THE TRESPASSERS ARE TRIED

The Lord asked Adam who had told him that he was naked, and if he had eaten the fruit of the forbidden tree. The evidence of his crime was so clear that he did not even try to deny it, so he tried another way to escape punishment; he tried to shift the blame, both to his wife and to God.

What he said was, “I did not pick the forbidden fruit, I received it from my wife’s hand and since You created her and gave her to me, you are the guilty One, not me.  You made me a bad woman.

He chose to forget how pleased he was on the day he received her and that he had never complained about her before. He also forgot that she was made of bone of his bones and flesh of his flesh.

God did not reply to this defense.

The Lord turned to the woman and asked her what she had done.  She took her cue from her husband and also tried to present a special reason why she could not be held accountable.

Her answer was that the snake had deceived her. So, what she said was, “I cannot be blamed for the snake was to clever for me, and since You created it, it was You Who deceived me through the snake.”

What does the Word say about such an answer?

Let no one being tempted say, I am tempted from God. For God is not tempted by evils, and He tempts no one. But each one is tempted by his lusts, being drawn away and seduced by them. Then when lust has conceived, it brings forth sin. And sin, when it is fully formed, brings forth death. (Jas 1:13-15)

How often don’t we hear the following angry shouts in our own homes: “It’s not my fault, it’s your fault!” And in a court of law, you’ll hear comrades, who were stealing and murdering together on Sunday, trying their utmost to shift their guilt onto one another on Monday.

Some of the most difficult words to say are: “I am sorry; I was wrong.” Ensure that you have these in your personal dictionary!

The snake/devil was not asked why he deceived the woman for he was known as the enemy of God and the father of lies.

Until recently He had been Adam and Eve’s loving Creator; now He was their impartial judge, taking an unwavering stand for what was right.

He was cursed above all animals. He would slide on his belly and would eat dust.

Because the snake had allowed the devil to use him as an instrument to persuade mankind to raise themselves to be God’s equal, he was humiliated into the dust of the earth; he was designated the lowest place of all the animals. Even the lizard had legs and feet, but the snake lost all his limbs and only had a head and a body so that, in order to move, he had to slither in the dust in the sight of the other animals. (Just imagine yourself suddenly losing your arms and legs and having to wriggle your body over the earth to move from one place to another!) Previously he had enjoyed eating green plants with the other animals, but now he had to eat dust.

Verse 15b is very important. There would be enmity between the offspring of the woman and of the snake. Her offspring would crush his head and he (the snake) would bite the heel of her descendant(s). This has a deeper meaning, referring to the future attempts of the devil to destroy the Son of God, Jesus Christ, Who was born of a woman centuries later and Who, in turn, would finally defeat the devil, and cast him into eternal damnation.  This happened in part with the crucifixion and resurrection of the Lord Jesus Christ.

Firstly, her childbearing would be accompanied by sorrow and pain.

Eve was not cursed as the snake was but had to pay a high price for her self-glorification. Despite the relief which medical science offers, women can testify to the truth of God’s Word concerning pregnancy and birth (and so can every man who has stood by when his wife gave birth to a baby).

Secondly, her desire would be for her husband and he would rule over her.

At the time of creation, man was not appointed to rule over the woman but, because she allowed herself to be deceived by the devil, her authority to make her own decisions was withdrawn and she was put under the authority of man. Her desire would be for him. She would also be dependent on him and turn to him to supply in her needs. (Later in the Word we shall see how, for the man and the woman whose relationship with God is right, this subordinate relationship has been re-created into something beautiful.)

Because of him, the earth was cursed.

At the time of creation, it was the man that was told to take care of the garden; the woman was only created later on to help him with this task. Therefore, the man was primarily responsible for the garden.

After his fall, he kept his mandate to cultivate and care for the garden, but it would no longer be sweet effortless labour.

The plants in the veldt turned into thorns and thistles and he had to prepare the soil and sow seeds in order to have a harvest and be able to care for himself and his wife.

The fruit trees did not produce as abundantly as they had before, so he had to live like an animal and eat the plants of the veldt.

Even the animals rebelled against him as he had rebelled against God. No longer would they come willingly to be studied and named; the buck would flee into the foliage of the bush and the lion would roar in defiance if he approached.

Naked had this man and woman played in the mild climate which had never been too hot nor too cold, but now it had changed, and the sun burnt down upon them. Now they laboured and sweated to make a living.

To God this sort of existence was no longer life; He called it death. He had known precisely what would happen if they would eat of the fruit of the forbidden tree and had warned them that they would die.  As from that day, every person, animal and plant is in a state of being dead (in a death mode) while still living.

From the moment a plant germinates, or a child is born, they move towards their day of final death. The devil’s advice was lethal poison and yet mankind still continues to lap it up.

The sentencing was past, the court adjourned; the Judge came down from the bench to stand next to His bewildered children. The fig leaves covering their bodies were torn and dried out; they were ashamed and, possibly shivered from the unknown cold and the Lord’s heart bled for them.

He still loved them and could not leave them in that condition. If they were to continue to function as rulers over his creation, their shame and guilt would have to be removed and their nakedness covered so that they could again stand in his presence.

So, He lay hold of innocent animals (perhaps they screamed in fear) and He slaughtered them. Their blood flowed.

These were the first deaths and the first blood that man had ever seen.

God then prepared their skins, making comfortable dresses for his two destitute children. I think they looked at him and smiled through their tears and He smiled back, and God and mankind were reconciled, their relationship was restored.

The spilling of blood to cover their nakedness, was a very important act of God for thereby He showed that sin had to be punished before it could be forgiven. This act pointed to Jesus, the Lamb of God, Who would one day die to cover mankind’s sin and shame.

God offered him, so that by his blood he should become the means by which people’s sins are forgiven through their faith in him. (Rom 3:25).

God knew that to live such a life of death for all eternity, would be indescribably painful. Therefore, He prevented them from causing yet another tragedy to befall them should they eat from the Tree of Life. He therefore banished them from the heavenly garden and appointed an angel with a flaming sword to guard the gate.

Now they were out of the idyllic garden and had to fend for themselves. Pain had come into the world as well as hard work, anxiety, and shame. What a story of woe. What a disappointment for God.

The Tree of Everlasting Life is still available, and God has provided another Gate to get to it. Its Name is Jesus. He referred to Himself as the door into God’s sheepfold (Joh 10:7).

Please ensure that you too, enter in and become one of His sheep and eat of the leaves of the Tree of Eternal Life.