Eve rejoiced greatly when Seth was born and attributed his birth to God’s goodness for giving her a son to replace the murdered Able. She saw him as a seed from whom mankind could develop.

Satan had halted the multiplication of mankind, but now God put it into motion again.

Then mankind started calling on the Name of the Lord

“Calling on the name of God,” possibly means that they began worshipping Him by His name.  What this was, we are not told. Was it a name He chose or one that occurred to them; if so which of his many attributes impressed them most causing them to name Him thus? Much later, when asked for his Name, He said it was “I am,” which implied that no human word could describe Him (Ex 3:14).

The genealogy of Seth As said earlier, the lineage through Seth is the lineage of the godlier people. They were so important to God that He caused the names of the successive first-born males, as well as their dates of birth and of passing away remembered and later recorded and incorporated in his Word. The people of that time must have been quite developed to have been able to determine dates of birth and to count to such high numbers.

This genealogy contains a fascinating amount of information and is, together with other similar registers, studied avidly by Bible students. If nothing more, it at least confirms to us the authenticity of the Bible and warns and/or encourages us that God is keeping detailed records of all that is happening on earth.

(Would you have liked to have insight into your heavenly file right now?)

Some interesting facts from this register

There were ten generations from Adam up to Noah.  In general, people became very old, an average of 858 years.  Methuselah the grandfather of Noah, lived longest, namely 969 years.  His name means “After him the flood”.

A few possible reasons for their high ages are the following:

A graph compiled of the names in this family tree, based on their dates of birth and deaths, indicates that the heads of families following on Adam, that is Seth, Enosh, Kenan, Mahalael, Jared, Enoch, Methuselah, and Noah’s father Lamech, were all born prior to the death of Adam and could therefore have heard the story of Adam and Eve’s care free existence in Eden and their catastrophic fall into sin, from Adam himself.  The story of creation and the subsequent happenings would therefore “stand firm in the mouths of many witnesses,” and would thus be transmitted truthfully to later generations. 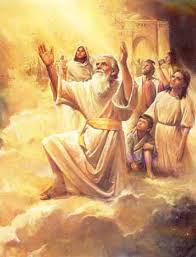 Enoch, seventh in this line of more godly people, had an exceptionally close relationship with God, described as “walking with God.”  Depicting this walk in human terms, we can say that wherever God walked, Enoch walked at his side, sharing in His thoughts.

Enoch also was a prophet of God who prophesied of the second coming of the Lord Jesus.  In Jude V 14, 15 there is a reference to this prophecy which means that it was accepted as authentic.  This prophecy and his other words are recorded in one of the Apocryphal books (books that are not acknowledged as part of our Bible).

He never suffered death for at the age of 365, God just removed him from this world to be with Him forever.

In the midst of all the spiritual decay of that time, God found a man in whom He could delight himself and with whom He could share His heart and life.  What a tremendous challenge for us!

Methuselah means, “after him the flood”.  His father, Enoch, must have received a revelation of the coming flood from God and gave his son this peculiar name to remind himself and everybody else of the coming disaster though much water would still run into the sea before that date.

In his immeasurable mercy, God allowed man a further 969 years (Methuselah’s lifespan) plus a further 777 years (Lamech’s life span) to repent before sending the flood.

Noah’s name means “Rest”.  His father, Lamech, already was 180 years old when Noah was born.  Did he find all the work within his family such a burden that he called his son “Rest”, expecting that Noah would now be able to assist him in his chores?  (Gen. 5:28-29).  Also, note that Lamech was well aware of the fall of man and of God’s cursing of the earth (5:29).

A further important fact to note, is that we all descend from Grandpa Adam and grandma Eve.  Nowhere in the Bible is there any mention of other people created by God.  This fact is confirmed in Acts 17:26 which states that He made of one person every nation on all the face of the earth.

Since all of us stem from Adam and Eve, we all have the same blood line; we are all relatives and the sinful character of Adam has been transmitted/conveyed/transferred to each one of us as is said in Romans 5:12.

When God created man after His own image, His intention was that He would live in close fellowship with him and His descendants.  This expectation got shipwrecked by Eve’s desire for independence and the couples’ disobedience.

God’s plans however were well thought through before He created this universe and that which He starts He always carries through successfully, even though He may suffer one setback after the other.  He has faith in his own ability to reach His goal.

The devil launches all sorts of short-term attacks on God’s creation and often gains victories, but gaining a victory in one conflict, is not the same as winning the overall war.

Like a master chess player, God plans His long-term strategies with greater wisdom than His opponent and trumps him time and again.

When Jesus died on the cross, the devil thought that, that was the end of the war.  But on the third day Jesus rose from the grave and gained the victory that would clinch the final outcome.

We need to take note of this in order that our faith in the Lord may gain momentum to trust Him completely even when it seems that we are at a point of loosing everything.  In the twinkling of an eye God changes our losses into credits because He is a wonderworking God.

We must therefore follow his example not to give up on a project which we launched at His command when it seems to go wrong; no, we must keep going steadfastly as God does, selflessly doing what is required to make it a success.  The following are some examples of His perseverance:

Let us as beings created in His image and being His children, take courage from His example run our short little race with dedication in the absolute assurance that we too will gain the victory and share in his perfect new kingdom.