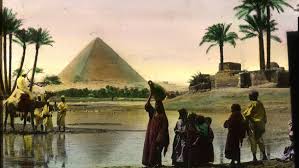 Up to this point, Abram’s conduct had continually been without reproach, but every child of God has feet of clay and when reading this portion of Scripture, we stand shocked and dismayed, watching our hero of faith stumbling in his walk with God.

When tested by a crisis, Abram made his own plan.

Famine came to the land Canaan and Abraham decided to go to Egypt where the Nile river assured good crops even during bad years and where his people and animals would find food.

The question that is of the essence, is whether the Lord had led him to do so, or whether it was his own idea to solve a very pressing problem?  Judging by other occurrences  when his faith also failed (later in his life), the second possibility would seem to have been more probable; he did not trust the Lord to provide for him in the promised land and so he sought a temporary alternative, meaning to return to Canaan as soon as the drought was broken.

He was not led by God but was driven by fear. The beautiful promises that God had made to him way back in Haran were covered by the sand that blew over their tents, week by week and month by month. Yes, he still remembered that God had promised to make him a mighty nation, but where was God now while man and animals suffered during this terrible drought? Should he wait on God and continue praying for rain or should he not rather find his own way out of this dilemma before losing all his livestock and even some of his slaves?

It sounds so reasonable, but such a deviation from God’s way, means that you are moving out from under His protection and that you will have to make your own plans again and again to get yourself out of the pits you fall into along this way of your own choosing.

Abram’s plan lands him in a greater crisis.

The long trek to Egypt was now over and the herds of animals munched contentedly on the lush green grass. The famine was resolved and everyone in the camp praised Abram for taking such a wise decision.

But, as they relaxed in their tents in the shade of the palm trees, a second crisis suddenly threatened them. Abram had, on his way to Egypt, humanly speaking and with good reason, feared that the Egyptians might notice his exceptionally beautiful wife, Sarai and that the Pharaoh would cease her and murder him in the process so that he would not be guilty of marrying a married woman.  So how would they deal if this would really happen?

Abram had by then already mistrusted God when he decided to go to Egypt for relief. Having done so once made it easier to do so again, so, before reaching Egypt, he and Sarai contrived a way out. Yes, they trusted God for protection, but it was wise to have a plan B just in case … .

The plan they hit upon was that Sarai was to tell a lie, saying that she was Abram’s sister.  The result would unfortunately be that Pharaoh would take her into his harem, but Abraham would at least not be killed.  Was this not the least of two evils?  And was she not indeed his half-sister?  A rational answer to the problem.

And this was exactly how it happened. The Pharaoh took Sarai as his wife and richly compensated Abram, her “brother” with gifts of animals and slaves. This, however, could not cover Sarai’s disgrace – a shame to which she was an accomplice because of the lie she had told to protect her trembling husband. 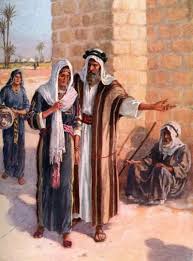 But this misstep had wider implications; it did not concern only   the two of them.  They had not kept in mind that God also had an interest in Sarai.  He wanted to use her as a mother for His nation Israel, but now she was in the hands and in the harem of a heathen king who was going to use her to bear children for his kingdom – a conflict of interests: “King against king”.  One feels somewhat sorry for the smaller king, the king of Egypt, because he was not at fault.

Yes, children of God that move out of His will, land everyone around them in predicaments (think of Jonah).

God delivered the couple from their dilemma.

To free Sarai, the Lord intervened and punished Pharaoh with severe plagues.  Somehow, he realized that these disasters related to the fact that he had taken Sarai as a wife.

There and then he called Abram to justice because he had lied to him and, in so doing, caused him to sin.

What an embarrassment for a man of God to be reprimanded by a heathen king for a moral transgression. 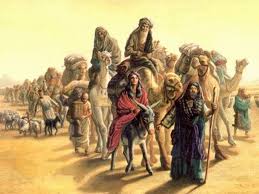 He summarily deported him and his people back to Canaan, and that, under escort.

Although Abram and Sarai had been unfaithful to God, He remained true to them and delivered them from their predicament. (How Abraham sorted out this matter with his wife, is another question!)

Life lessons for us

In summary: The lesson we need to learn, is that we are to trust God completely, although circumstances seem to be all against us.  Unbelief leads to lies.  Lies land us deeper into trouble.

Learn from your mistakes and do not repeat them, for then you will be tempting God.

The good news:  Even if you have sinned, you have not lost your promised land, your heavenly Canaan, your salvation.  God is long suffering, patient and full of mercy. Call on Him and He will deliver you from the pit and set your feet on the rock.