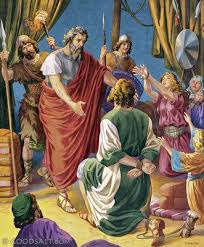 Back home, another crisis surfaced.  A dispute arose between the shepherds of Abram and Lot as regards grazing rights for their masters’ flocks.  When Abram moved away from Ur of the Chaldeans, he thought it a good idea to take his cousin, Lot, with him to Canaan.  One can think of several good reasons why he had done so, for instance fellowship, security, etc. but God had not instructed him to do so and now it backfired on him.

What an embarrassment:  only two believers together in a foreign land and they were unable to get along with one another.

Abram took the initiative to end this unpleasant dispute (disagreement) and suggested that the two families separate from one another and conduct their farming businesses some distance apart.

He also afforded Lot the opportunity of having the first choice as to where he wished to settle.  Lot looked in all directions, noted that the Jordan valley had plenty of water and chose to settle there, in the vicinity of Sodom and Gomorrah.

In the previous incident, we saw a bad flaw in Abram’s character but here we look at him from another angle and unexpectedly come upon two precious gems embedded in his life namely humility and generosity.  Though God had promised the land of Canaan to him, he did not cling to it but humbled himself, allowing Lot the opportunity to choose the best grazing pastures for himself.

When some Christians see that there is an opportunity to either make money, or a danger of losing it, they totally forget to put God first and fight like cat and dog for the best deal.  This even happens between heirs immediately after a burial service.

But Abram was not only a man of faith, but also a humble man for faith and humility go hand in hand.  Jesus humbled himself, became a servant of mankind and was crucified like a thief, after which His father exalted Him and gave Him a Name above all other names.

If we are willing to be the least amongst men, God will lift us up and appoint us over others.  Do not grab at the things of this world; wait on God to put them into your hand.

Abram’s willingness to allow Lot the first choice, reflected his trust in God and this pleased the Lord so much that He visited him once more and confirmed His promises to him.

Abram then continued moving around in the land.  He was enjoying God’s gift. He could enjoy it because he did not desperately hang onto it. The land did not possess him; he possessed the land. He could, at will take it up or lay it down.

When we can possess everything which God gave us with such an open hand, He has accomplished a mighty work of grace in our lives. Then we will even, if necessary, lay down our lives for Him.

Abram again built an altar on which he could offer to God.  This is now the third altar of which we read, and God considered it so important that He kept record of them.  The altars he built, indicate that he not only enjoyed God’s gifts, but enjoyed God above all.

Sodom and Gomorrah were two ungodly cities that were not under God’s protection, with the result that they were conquered by their enemies in war.  Lot and his household, who were living in these cities, were carried away by the enemy as slaves, together with the other residents.

When a person chooses to dabble in sin, he runs the risk of becoming a slave of it.  This is what happened to Lot. When leaving Abram, Lot had probably pitched his tents in the green pasture of the Jordan valley, keeping well clear of the wicked cities of Sodom and Gomorrah, but gradually moved closer and closer, “bought their groceries there,” and after some time decided that they could just as well settle in one of the beautiful stone houses rather than continue to face the hazards of living in a tent. But – now they had become one with that community, sharing not only in their wealth and comfort but also in the judgment that was upon them.

Abram to the rescue

At this stage, Abram, had become a very rich man, having many slaves and staff, because God had blessed him as He had promised to do.  He was able to put together an army of 318 men.  He also was a courageous man and had trained his people to defend themselves.  What is more, He still had a heart for Lot and held no grudges against him, because he had chosen the best pastures.  He did not  say to him, “That’s it, you were the one who chose to live in the green pastures, now see what it has come to, you are now reaping what you have sown.”  No, by risking his life and the lives of his people to deliver Lot and his household, he demonstrated that he was still caring for him.

This is also how we are to treat those that have wronged us.  We must, where necessary, be willing to risk our lives to save those that have been captured and borne away by the devil – as Jesus did.

We also note that even in war, God was with Abram and gave him a complete victory.

Abram in turn, without being requested to do so, gave Melchizedek, the Servant of God, one tenth of the loot he had taken from the enemy.

This is the first indication in the Word of God that we are to honour Him by giving to Him at least the first tenth of our income to express our gratitude that He enabled us to have this blessing.

Abram refuses to be enriched by the heathen.

As regards the rest of the spoils, Abram wanted nothing of it for that could be seen as compensation from the heathen for delivering them from their enemies.  He wanted God to receive all the honour for the riches with which He had blessed him.

We must not accept money that will disgrace the Name of the Lord such as money derived from lotteries or moneys which we suspect had been stolen.