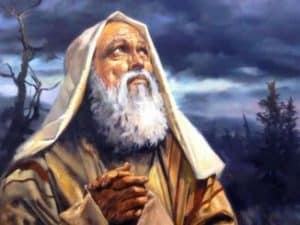 As the years slowly rolled by and no child was born to Abram from whom an offspring could come, his faith that he would become the father of a great nation, gradually faded and God, who knows our deepest thoughts, was aware of it.  He realized that He would have to do something to stir up Abram’s faith once more, because, for the promised son to be born, Abram had to cooperate with God.

The Lord appears to Abram in a vision.

So, God visited him in a vision in which the Lord firstly encouraged him not to fear.  Possibly he felt threatened, surrounded by the Canaanites that were ever so often on the war path.

When the almighty God says to a person, “Do not fear,” it has an electrifying effect on him.  His words come with authority like when, at the time of creation, He said, “Let there be light,” and immediately there was light.  His words touch you deep within.  There is a transfer of godly power.  In Scripture, we often find God saying to His scared children, “Do not fear; only believe”.

He assures Abram that He is his personal bodyguard

Secondly the Lord said to him, “I personally stand between you and your enemies.”  It must have been a great comfort to him to know that the Lord was not only with him but took up a position like a shield between him and his enemies or threatening disasters.  These things had to get past God before they could hit him; and who and what could slip past the Almighty or push Him out of the way?

He encourages Abram to focus on his achievements

Thirdly He said to him not to focus so much on his challenges; that would hypnotize him.  He was to focus on the positive things in his life; on the tremendous eternal reward that he had already accrued by his obedient moving out of Ur, then his fears would disappear.

If you focus (stare at) a snake one meter away and ready to strike, your facial expression will reflect fear, but if you focus on a delicious plate of food on the table before you, your expression will display delight. Likewise, spiritually you can either focus on the scary pictures the devil puts into your mind or the encouraging words of the Holy Spirit.

The three things which the Lord said to Abram, may also be appropriated by every child of God who left the sinful world and is now traveling to heaven. With every temptation that we overcome, every stronghold of sin of which the walls fall because we are exercising our faith, and with every step of progress we make on the way of sanctification, our reward in heaven increases.

It also increases by that which we do for the Lord’s children and for His Kingdom.  Jesus promised that even a cup of cold water given to one of His people, will not go unrewarded.

The dark glasses of depression

But Abram was depressive, exhausted, tired of trying to believe. He lay there in the pitch-dark tent, staring up at image of God before him. He is hearing what God is saying to him but his reason for feeling is not so much the enemy surrounding him, but the enemy within his own body and that of Sarai. For years on end they have been sleeping together, but every month at the appointed time, when she walks by on her way to the water well, he would look up from what he is doing and she would just, almost imperceptibly, shake her head and he would look away at the distant hills and mumbled, “Nothing, still nothing – will have to wait another 30 days.”

They no longer discussed this matter of the birth of a son with one another. It was too painful. And when they let down the tent’s flap behind them and come together under the kaross, they are tense, so tense, almost afraid of one another. “Why Lord, why? Why do we have to wait so long?”

So, after God had spoken to him, Abram licked his dry lips and enquired hesitatingly “Lord what do you have in mind for me? My years are moving on. One of these days my time on earth will be up; then I will pass on without an heir. As things now stand, my servant Eliezer will inherit my whole estate. Is that what you want?”

“No, Abram, not that, the one that proceeds from you own body, from your own seed, he will be your heir.” Were there tears in his eyes? Was a small flame of hope perhaps kindled from the ashes of his faith?

Focus on the stars

Then the Lord did something unusual:  He led Abram outside to stand under the starry heavens with the camp sleeping around them.  Then He told him to look upwards, towards heaven and to count the stars. If he was able to count their number, he would know what the number of his children, grandchildren and their descendants would be.

As he stared at the milliards of heavenly bodies and realized what an exceedingly great plan God had for him, a flood of faith suddenly erupted in his heart and God saw it and reckoned it to him as righteousness.  Put differently: God decided, “He truly believes in Me, he entrusts himself to Me and that is all I require of a human being and therefor I declare him to be in right standing with me.”

Focus on Him, not on yourself

We receive our salvation (new birth/forgiveness of sins) when God sees within our hearts that we believe in Him, with all that is within us, and that we entrust ourselves to Him.  That, of course, includes that we believe that the Lord Jesus died for our sins on the cross in order that He may impart everlasting life to us.

Focus on His grace, not on your shortcomings

Abram, being a man of nature, would in future, as soon as doubt would threaten to overcome him, walk out of his tent at night, look up and remember his night with God under a cloudless heaven and how faith had burned within his heart.

God had this episode in Abram’s life recorded in his Book so that you and I can see how much trouble God takes to uphold a person’s faith so that we, just like Abram, will co-operate with the Lord in the process of spiritual growth.

Abram’s faith now once more took firmly hold of God’s promise that he and Sarai would have their own son, but what about this land? This country had also been promised to him but after many years it was still firmly in the hands of the Canaanites and he, his people and stock were continually moving around as squatters; there was not a hand-width to which they could lay claim as their own, and no hope of a drastic change in the near future?

So, again, God spoke to Abram, assuring him that He had brought him up from Ur of the Chaldeans to give him this very country.

But Abram was not convinced and asked for some sort of proof. Was he not sinning? No, this was not an act of arrogance, daring God to prove himself, but an admittance of weakness like the man who cried out, “Lord, I believe. Help my unbelief” (Mark 9:24).

God saw that His child was trying very hard to believe and He was not cross with him but came to his assistance with a practical sign.  He did this in a very dramatic way; something which Abram would never forget.

God enters into a covenant with Abraham

What He did, was to command Abram to bring Him certain animals. Abraham did so, cutting some of them down the middle into two halves and laying down all these in two rows over against each other.

What God was now going to do, was something well-known in the culture of that time, but He added His own supernatural touch to it, making it very spectacular.  When important agreements were contracted, the parties cut animals into half, lay them down on the ground, then walked through the passage between them.  In so doing, they were saying, “May I be cut in two like these animals should I fail to keep this contract.”

(Had this legal action been performed nowadays, the Lord would probably have put His promise down in writing, signed it, sealed it and have handed it to Abram to keep locked away in his safe.)

When night was about to fall, Abram fell asleep during which a terrible fear and spiritual darkness came over him.  Abram would have realized very well that what was happening to him was absolutely supernatural, that it was of God and that the Lord wanted to convey something important to him.

Then God spoke to him, telling him what would happen to his descendants before they would take the land into possession.  They would, for 400 years, be slaves but would emerge from slavery with much riches, then come to this land of promise.  The Lord also described to him the boundaries of the land as well as the names of the different nations He would give into their hand.

When night fell, the Lord sealed His words by passing through between the animal halves in the form of a smoking oven (fire pot) and a flaming torch.  In this way He made a covenant with Abram.  On top of it all, the Lord gave him the assurance that he would live to a ripe old age before passing away.

(Let us note that Abram himself did not pass through between the carcasses as God did.  The reason for this probably is that man is too weak to keep an agreement with God.)

In this way, God had, in a visible, dramatic, supernatural way, confirmed his promises to Abram to strengthen his faith. It surely left such a tremendous impression upon him, that he would never have forgotten it.  During the years that lay ahead, this incident would help him to continuing believing.