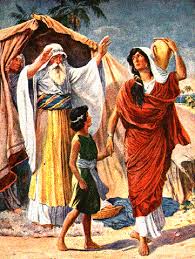 The friction between Hagar and Sarah had come a long way: from the time that Abraham had conceived Ishmael by Sarah’s slave girl, Hagar and she had responded by looking down upon Sarah.

As the mother had done, so did her son Ishmael.  Because he too was a son of Abraham, he was more forward with Isaac than what the children of the other servants would dare to be.  He mocked Isaac – probably teased him for he was much older than he.

It was however not only this that upset Sarah; she was realizing that this friction between the two boys would increase as they grew older.  Ishmael would, because he too had been conceived by Abraham, want to share in his father’s estate which would result in a much smaller inheritance for Isaac.

Sarah saw what Abraham did not, she also envisaged that Ishmael and his descendants would be jealous of Isaac and his offspring.  This would result in strife to be the successor to Abraham.  A serious enmity would develop that could result in Isaac not only loosing his legacy, but also the land Canaan which God had promised not only to Abraham, but specifically also to Isaac (“For your offspring will be accounted as from Isaac.” Gen 21:12).

Sarah was determined to ensure that this would not happen and for that reason she insisted that Hagar and her son be sent away.

The subservient little wife who twice had acceded to her husband’s request to tell a lie which had caused her to land up in the harems of two different kings, now took a stand against Abraham and fought for the rights of her son like only a mother can.

To banish Hagar and Ishmael from their lives, was very wrong in Abraham’s eyes.  He loved his son Ishmael and also felt responsible to see to Hagar’s welfare.  It was commendable of him to have this attitude, but he was looking at the situation from a human point of view.

God had greater plans with this family.  He wanted to build Himself a nation from Abraham’s posterity, from which Jesus the Redeemer of all mankind, was to come and Hagar and Ishmael had to stand aside in order that this higher goal could be achieved.  For that reason, God Himself spoke to Abraham, telling him not to consider it to be wrong to send away Hagar and Ishmael, for this was not just Sarah’s idea, but His own will.

Abraham performs a painful operation to remove a threatening tumor.

The moment Abraham had heard of God, he obeyed and the very next morning he sent Hagar and Ishmael on their way, though it was very painful to him.

(Although the husband is the head of the home, he is to bring his wife’s advice to God in prayer.  In this way, they make quite sure that they are carrying out the will of God.)

What a heart-breaking picture the Word paints to us of Abraham who, early the next morning, lifted bread and a container of water onto Hagar’s shoulder and pointed her and her son into the desert.  When looking into his boy’s questioning eyes, was there anything he could say to comfort him, to put him at ease?  What turmoil there must have been in Abraham’s heart as he stood there, watching them walk away until they disappeared from his view?  And the worst of it all was that he shared in the guilt of having caused this to happen.  It was not Hagar that had enticed him; it was he that had gone to her.  It was he that had deviated from the will of God and he knew it full well.

The Lord, our wonderful Father, helps us to put right our mistakes of the past in order that we may proceed into the future without those burdens, but He does not spare us the bitter trauma that accompanies the correction, because He wants to teach us by this pain to walk carefully in His footsteps so as not to repeat our follies.

How many millions of “Ishmael” children are not, in this day, missing the love and support of one of their biological parents because these had somewhere missed the will of God?  Mother and child are together sent into the desert, or the mother decides by herself to rather choose that way out than to continue living together with the father of their children. Yes, the situation might have become unbearable for the parents, but a marriage normally gets worse because the couple’s relationship with God is breaking up.  That is where it all starts.

I am just wondering whether Sarah had that morning been sitting in her tent, crying for the two people with whom she had lived for so many years but were now leaving her life forever?  Was it also for her a traumatic experience or was she just gloating in it because she got what she wanted and because her problem was now solved?  Possibly she might have relished the fact that she was now finally rid of “the other woman” in the camp.

Hagar too, was not without weak points; she tended to flee from her problems.  Years before, she had fled from Sarah when she was badly treated by her, and now she flees from her dying child and sits down some distance away, crying.

Some of us also do this.  Some children of God flee from their homes to the pub to still their pain with liquor and idle conversation.  This is unwise, it solves nothing.

But Abraham must have committed Hagar and their son to God in faith and prayer and God saw her in her need.  She, in turn, might have been embittered towards God because of what His two chosen servants had done to her, causing her not even to pray for deliverance.

But the Lord Who looks down from heaven, heard the child’s woeful crying and spoke to Hagar, showing her where to get water.  God always has a solution and He even went a step further and began to give effect to His earlier promise in regard to Ishmael (“God was with the boy” 21:20) and assisted him to become an archer so that he could fend for himself and also for the wife the Lord later provided for him.

Note God’s goodness in your own life

If God is exceptionally good to some people (like to Abraham and Sarah) or has a special purpose for them, it does not mean that He is not also good to others (like to Hagar and Ishmael).

And if we are tempted to think that the Lord acted without compassion in this matter of Hagar and Ishmael, let us just close our eyes and look upon the cross to which God’s own beloved Son was nailed in order that mankind may be saved.

The two women and the two covenants

This account of the two women and their sons, is a picture of a very profound spiritual truth, namely the difference between the Old-Testament covenant of the Law and the New-Testament covenant of grace.  The Law bears slaves, but the Gospel bears children for God and citizens for heaven.  (Read more about this in Gal 4:21-31.)

In the previous chapter we saw that Isaac’s birth was a symbol of the new birth that takes place within a human being’s spirit when he gets born-again by the Holy Spirit.

The symbol contained in the episode of Ishmael, the son of the slave girl being sent away, is no less important for it bears the message to the Christian that he must not now that he has been saved by grace, try to keep God’s commandments in his own human strength, that is by his own reasoning and willpower, for that is living the Ishmael type of life and will continually fail and bring shame upon him. He must trust fully in God’s grace, working by Holy Spirit to bring about the Isaac life within him so that God’s deeds, words, thoughts and attitude will flow from his life.

Abraham’s presence had not passed unnoticed by Abimelech the king of Gerar.  Some time before, Abraham had feared that he would kill him for his wife, but since then, Abraham’s possessions, servants and slaves had increased considerably.  A supernatural blessing of God was upon him and Abimelech acknowledged this, saying: “God is with you in all that you do” (Gen 21:22).  For this reason, Abimelech feared him and approached him with the request that they enter into a covenant of peace with one-another.