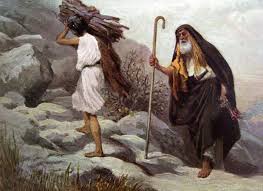 Abraham’s ultimate test of faith and love towards God

By this command to sacrifice his son, God was testing Abraham, affording him the opportunity to prove his faith and obedience and also to further develop it.

The Lord formulated His instruction in such a way that it would convey to Abraham that He was deeply aware of how great the sacrifice was that He was requesting of him: “Now take your son, your only son, whom you love, even Isaac,” (WEB). The Lord had in fact said to him: “I know exactly how precious he is to you and what I am asking of you”.

It is also significant that he was to sacrifice Isaac on Mount Moriah, a journey of about 80 km.  Moriah is nearby where the God-city Jerusalem would later be built, and where the Father would hand over His only Son, Jesus, to be crucified for the sin of mankind.

Again, we note that Abraham immediately obeyed God.  Early the next morning, he prepared for the journey, taking firewood, and set off, taking along Isaac and two of his servants.  Along the way, he left the servants behind, explaining that he and his son would go and worship and then return to them.

This is real faith

Abraham was quite convinced that the Lord would, by Isaac, give him innumerable descendants and therefore he firmly believed that God would raise him from the dead:

“By faith, Abraham, being tested, offered up Isaac. Yes, he who had gladly received the promises was offering up his one and only son, to whom it was said, ‘your offspring will be accounted as from Isaac’; concluding that God is able to raise up even from the dead. ” (Heb 11:17-19).

When Isaac enquired where the lamb was which they would offer, Abraham replied that the Lord would provide for Himself.  That was a wise answer, and that was the truth.

Isaac carried the firewood on his back, like Jesus would later carry His own cross to Golgotha.  At the place which God indicated, Abraham built an altar, laid the wood on it, bound his son Isaac and laid him onto the wood.

Was Isaac willing to be offered?

How old would Isaac have been at that stage?  Probably old enough (in his 30’s) to have made his own decision as to whether he was willing to be sacrificed as a burnt offering or not.

The reason for this viewpoint is that he was a picture of the Lord Jesus Who had acquiesced to be sacrificed:

“Therefore, when he comes into the world, he says, ‘Sacrifice and offering you didn’t desire, but you prepared a body for me. You had no pleasure in whole burnt offerings and sacrifices for sin. Then I said, ‘Behold, I have come (in the scroll of the book it is written of me) to do your will, O God.’” (Heb 10:5-7; Ps 40:7).

Secondly, it is unthinkable that the Lord would want a child that could not understand why this was to be, go through such a traumatic experience. God never forces decisions upon us; He declares His will and leaves it to us to decide.

(To be very down to earth: If Isaac had been a young boy, he would have run away at top speed from his elderly father as soon as he saw that he was taking up the rope to bind him and lay him on the altar!)

“Where the heart goes, the man follows,” (Joyce Meyer)

Abraham then took up the knife to slaughter Isaac.  He had reached a final decision to sacrifice him as a burnt offering to God.  In his mind it had already been done – there was no doubt or hesitation that he would go through with it.  Isaac had also, by faith, given himself to God and his father in obedience to be sacrificed.

Abraham had previously, on a few occasions, doubted and failed his tests of faith.  God however had continued to speak to and encouraged him to continue trusting and obeying Him.  Now Abraham passed the greatest contemplatable test of faith, namely, to sacrifice his son as a burnt offering to God, believing that God would raise him from the dead and return him to him, his father.  In this, God had also demonstrated His all surpassing power to change the heart of man into His image.

The test of faith which Adam and Eve had failed in paradise, Abraham had now, in a much greater way, passed on Moriah.  With the exception of Jesus’ offering of Himself on the cross, this could possibly be the greatest deed of faith ever accomplished by man.

At that moment the Angel of the Lord called to him from heaven saying:

“Don’t lay your hand on the boy or do anything to him. For now I know that you fear God, since you have not withheld your son, your only son, from me.”  To fear God means to stand in holy awe of Him; to have an exceptional faith in Him and a deep love for Him.

The Father provides his own sacrificial ram

Then Abraham saw a ram of which the horns got entangled in a bush and took and sacrificed it.

The Lord had intervened so that Isaac was not sacrificed, but when God’s Son was laid down on the cross at Golgotha and the Roman soldier picked up the hammer to drive the nails through his hands and feet, the Father had to turn His face aside, allowing them to proceed, because there was no substitute ram kept in readiness to die in His stead.  Jesus Himself was the substitute ram, not only for Isaac but also for you and me.  Abraham then named the place, “The Lord will provide”.

The Lord God was overwhelmed by His friend Abraham’s trust in Him, his obedience and his unselfish love, so again He spoke to him audibly, confirming His earlier promises, this time doing so with an oath.

All of us would be glad to have God speaking to us as He did to Abraham, giving him promises, but remember, He does not only give promises, but also commands.

Sometimes He commands us to bring painful offerings.  The question is: am I willing to be obedient in all things as Abraham was?  Are there any outstanding sacrifices in my diary?  Had God spoken and I not obeyed?  Sometimes that is the reason why the Lord no longer speaks to me – He is waiting for me to do as He had requested before.