Abraham, a shining light in a dark country.

Abraham was greatly respected by the people of the land as we see in the conduct of the sons of Heth and especially that of Ephron in regard to Abraham’s desire to buy from him the cave of Machpelah. He had come to dwell in this country as an unknown immigrant, but by his exemplary conduct, even the heathen respected him as a prince (monarch) of God.

Likewise, the people of God need to glorify his Name in being the light of the world wherever He directs their footsteps (Matt 5:16).

Regarding the piece of land he bought: although the Lord had promised all of the land of Canaan to Abraham and his offspring, he could not yet lay title to a single square meter of it. At this stage it still belonged to others and he was but a squatter. He was therefor willing to pay the full purchase price for it. He did not use his privileged relationship with God and the fact that he could rightly call himself a prophet (as God had done) to gain material wealth for himself.

He was a fine businessman accumulating great wealth, but also an honourable businessman respected by his clients. He did not squabble about the price of the property but paid what the seller wanted for it.

Abraham wanted to ensure that Isaac would marry a believing wife and sent his servant to his God-fearing relatives in Mesopotamia to find him a wife.  Isaac’s father was very rich and most girls would have been more than willing to marry him, but he waited on God though he was well over 30 years of age.

Isaac’s marriage was also important to God, because He wanted to build a nation for Himself.  To do that, it was important that both father and mother of each successive generation would believe in Him, so that they could raise their children in the fear of God and build up a God-fearing generation.  Such a wife was only to be found amongst Abraham’s relatives.

It is also important to note that Isaac did not go out and find a bride for himself but allowed God to select one for him through Eliezer.

For a Christian the rule is that the spouse must not only be a born-again child of God but must be chosen under guidance of the Holy Spirit. To wait on God for the right spouse, is so important.

The “ambassador” who Abraham sent on this mission of faith, probably was his most trusted servant and spiritual friend, Eliezer (see Gen 15:2) and he had to travel up to Haran and then down towards to the present day Persian gulf with his ten camels and fellow servants to get to Nahor’s place.  Had he not been a humble man who sought God’s will and honour, his master would not have entrusted him with this very important task, as well as with so much riches.

Eliezer asked God to point out to him by way of a pre-arranged sign, the bride of His choice; and God did so.

At that time, it was expected of a woman to present her container with water to strangers. Rebekah, however, did more than that and, “walked the second mile” by offering to also water the camels.  (A camel, when walking long distances, will drink as much as 50 liters of water at a time – therefore 500 liters were required for the 10 camels).

This was no small task and Rebekah displayed the attitude of a servant by offering to do it.  Eliezer was not looking for a beautiful or a rich wife for Isaac, but for a virtuous woman, a woman of character and he found such a one in Rebekah.

A glittering presentation by an absent bridegroom

He then presented the girl and her family with expensive gifts.  This was not to bribe them with riches, but to convince her of the greatness of Abraham, his master, so that she would be willing to entrust herself to him.

A tough decision in which God swayed her heart

The Lord must also have confirmed to Rebekah and her relatives in other ways that this matter was of Him, for indeed it was a great step of faith to accompany a group of unknown men to a distant country and there to marry a bridegroom she had never seen before and settle with him in a country she did not know.  The many camels and riches proved that he would be able to take good care of her, but then there also was Eliezer’s saintly bearing and his intimate knowledge of Abraham that said more than words could describe.

In the end, Rebecca herself had to decide whether she would accept the offer or not.  Apparently, she did this without reservations.  What a romantic marriage. God is the author of romance. 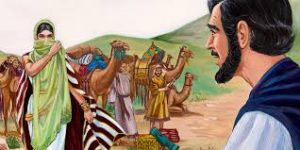 In the end they were all satisfied: firstly, her family, secondly Eliezer who saw her as a gift from God and lastly, Isaac the bridegroom who had waited so long for a wife.  He must also have been very pleased when she later removed her veil and he saw what a beautiful woman the old man Eliezer had selected for him.  This couple never divorced although their marriage experienced some heavy storms. It is for a good reason that Scripture often cautions us to, “wait on the Lord”.

This account is also a picture of the Holy Spirit, sent into this world by the Father to select a bride for His Son, Jesus Christ.  Whosoever replies, “yes,” to his offer, becomes part of the heavenly romance and is on the way to the riches above.

During his lifetime, he gave gifts to the sons of his second wife and sent them away, each to a different area in order that, at his death, Isaac would be his only heir; a wise decision and action.

Ishmael conceived 12 sons who became patriarchs to 12 tribes, just as God had promised.

Abraham died at the age of 175 years and was buried with Sarah in the cave of Machpelah.

Ishmael did well by not bearing a grudge because he and his mother had been sent away from Abraham’s camp, and attended his father’s funeral, together with his half-brother, Isaac.

Scripture devotes 13 chapters to Abraham’s battles of faith in his relocating to Canaan, the conception of Isaac and procuring of a wife for him and only half a chapter to the rest of his life, because God wants to teach us, who follow after him, how to walk by faith.  He is, as it were, the father of all believers.