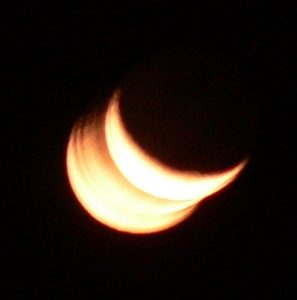 On this second day God created the atmosphere, a layer containing several different gases. He laid it on top of the waters that still covered the land. This would be needed by the things He would create afterwards. Nitrogen and carbon dioxide gas would be used by the plants to grow, oxygen by the animals and humans to breathe and the vast atmosphere for the birds to fly around in.

He also evaporated some of the waters, causing it to become lighter than the other gases so that they rose up above the atmosphere, forming a layer of cloud that completely surrounding the earth. So, at the earlier stages of the earth, there was no direct sunlight onto the surface of the earth which allowed for a milder climate.

Later on, when this upper layer of cloud was removed, the atmosphere served as a medium through which the clouds could be blown (transported) speedily over vast distances to provide rain deep inland. 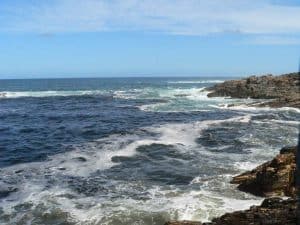 Not all living things which the Lord was going to create, would be able to live within water, therefore He caused portions of the land to rise up from beneath the waters to above the water’s level, causing the waters that covered them to drain away, forming areas of dry land surrounded by sea water. Today we have huge continents of dry land like Africa, North America, South America, Australia, Britain, Europe etc. Up to this point God was working with lifeless matter. 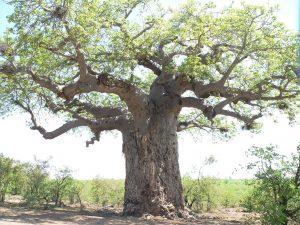 The earth was now ready to support vegetation.  He had prepared it just as we prepare a piece of land before we plant our maize, wheat, cabbages or whatever.

Now, for the first time, there would life on earth.  Plant life is the first and lowest form of life. It germinates, grows and multiplies solely per code (a law, a program, an instruction) that God put into it. Generally speaking, it has no senses like sight, hearing, smelling or tasting, although it is sensitive to changes in temperature and light. It is unable to think, speak or move around. Some of it was intended as fodder for animals.

Two kinds of plants were created: grain bearing plants (like wheat, maize, etc.) and fruit bearing plants (trees like peaches, mangoes, etc.).   What a tremendous variety of trees we have, bearing delicious fruit of all tastes. A list of all the plants God created is not given, but just think of the multitudes of flower species. God was preparing a most beautiful habitat for His living creatures to enjoy.

The appearance of the earth was now transformed, and God took a good look at it.  No longer was it a deathly brown; it had suddenly become a beautiful green garden covered with multicoloured flowers.  No longer was it empty; it was now beginning to fill up with beautiful things like when a rich man is buying furniture for his new house because he is planning to marry a beautiful wife and wants her to enjoy it. The Lord saw that it was good.  Then night fell and the third day went to sleep.

Oh, how great is God.  Have we ever met anyone that can create something from nothing?  Do we know someone that has nothing in his hand and speaks a word and suddenly there is a small tree in his palm and he gives it to you and you take it home and plant it and it grows and becomes a peach tree?  No there is none but God that can create, praise his Name.

On this fourth day God would give more attention to the sources of light and ways of measuring time.

Scientists tell us that when the universe, that is the enormous numbers of constellations of stars, came into being, the earth was just one of them, extremely small and insignificant in comparison to most of the other heavenly bodies. The Bible however says that the earth was the first heavenly body to be created and that all the others were created afterwards for the sake of the life on earth.

God replaced or supplemented the light He created on the first day, by the sun moon and stars which He created on the fourth day. Their primary function was to provide light on earth. The larger and brighter sun was to provide light during daytime and the smaller moon (which, as we know today, only reflects the light of the sun) and the stars, were to provide subdued light at nighttime so that nocturnal animals could still move around but that the level of activity would tune down, affording God’s creatures a period of rest and of recuperating their strength. For human beings, it would also provide an opportunity to fellowship more closely with their Creator (Gen 3:8).

God also created time. The constant revolving of the earth on its axle resulted in days. We later divided a day into 24 hours, an hour into 60 minutes and a minute into 60 seconds and made watches to measure these accurately so that we can interact with one another in an orderly way.

God however, not us, laid down the time scale reflected by our   calendars. He created year periods by letting the earth revolve once around the sun in 365¼ days which equals one year. Then He tilted the earth on its axle causing the northern hemisphere to point towards the sun for half of the year and the southern hemisphere for the other half. The section pointing towards the sun, receives more heat and enjoys summer while the areas facing away from it endure winter. Autumn and spring are the slow transition periods between summer and winter. The length of days, years and seasons are fixed by God and cannot be changed by man.

God clearly planned a certain lifestyle for man that was to be regulated by time frames which He pre-determined for our security, wellbeing and happiness.

How wise (intelligent, ingenious, inventive) is our God!

The universe consists of an immeasurable number of galaxies (groups of stars) and each galaxy in turn comprises millions of stars and planets. Our solar system (sun system) with its sun and 9 planets, is only a small speck in the galaxy we call the “Milky Way.” The diameter of our sun is 864,938km and contains 99.8% of the mass of our solar system and 1.3 million of our earths could fit into it.

Again God looked at the work of His hands, saw that it was well done and liked what He saw.

(When you reach the end of a hard day’s work, do not just rush home where there is more work awaiting you, but stand still for a moment, consider what you have done and if you are satisfied that you did it well, praise the Lord for enabling you to have done so and you will sleep well and return joyfully the next morning for another day’s fruitful service.) 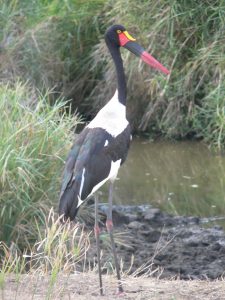 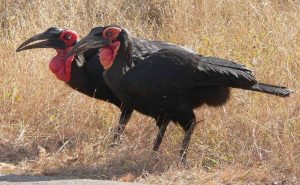 On this, the fifth day of creation, God filled the empty heavens with birds and the empty seas with fish and other oceanic creatures – (He stocked His well-prepared farm with animals of all kinds). Just as in the case of the vegetation, He created an abundance to fill the heavens and the seas which indicates that He did not have in mind that one specie was to develop from another. He did not create only one kind of bird nor one kind of fish, leaving them to develop into other kinds according to their own insight and inclination or even to chance. How could He have expected from a sparrow to have the vision to develop into an ostrich or a whale to tune down to and grow arms like an octopus. It was our all wise, creative God that formed every species of fish and bird different from the others and gave to each its own way of existing. And what a multitude of different species He created. He never runs out of ideas.

He then blessed them, that is, He spoke His favour over them, empowered and commanded them to multiply and fill their domains to fulfil His goal for them.

His part was to create; theirs to multiply. In this way they would work together to reach His goal. 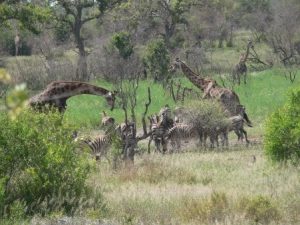 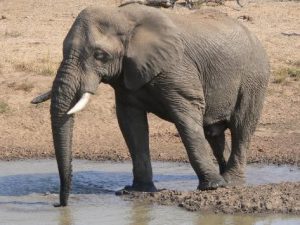 On the sixth day, God created all the livestock and wild animals. All in one single day, He created every imaginable animal that we observe today.

Animals were of a higher level of life than plants. Their physical characteristics included that they could move, hear, taste, smell, feel, generate sounds. They could thus perceive what was happening around them and react knowingly, intelligently, to it. 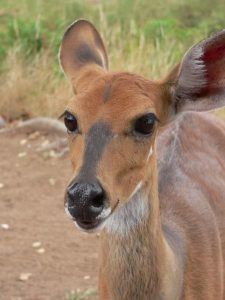 They also had basic thought processes such as a buffalo finding the safest place to cross a river or as a chimpanzee picking up  a stick  and thrusting it through the bars of its cage to rake in a banana that is out of his  reach. 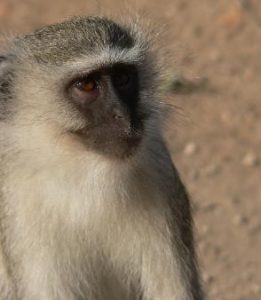 It is however doubtful whether they can plan ahead. When the ant gathers food in the summer for the winter months, he does it by instinct and not by planning. Animals communicate by body language and by sounds, but do not have language in the true sense of the word.

Because the animal has no spiritual component as part of its composition, it can, as far as we know, not communicate with God Who is Spirit.

Also, note that the food God placed on the animals’ menu, included all the multitudes of green plants to satisfy every possible taste and preference (1:30).

When we contemplate the animal kingdom, we are amazed by the Almighty’s ingenuity: think about the old tortoise that crawls laboriously along the earth, while the eagle is carried effortlessly high above him by invisible air currents; every one has its place and purpose on God’s beautiful earth.

God made them all and was pleased with them.

Long debates are carried on in Christian circles about the length of the creation days: were they days of 24 hours as we know them today, or possibly periods of thousands of centuries each, as some scientists allege? This question may eventually be resolved but the most important point is this: that everything, but everything, was created by God and without him nothing that exists came about. To Him alone be all the honour and glory for all eternity.