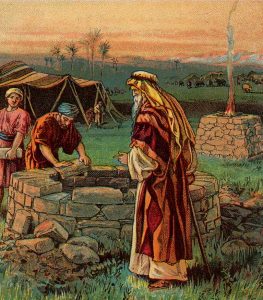 Famine came to the land because of a drought and Isaac had to make a plan to keep his family and multitudes of livestock alive, so he moved to the area of Abimelech, king of the Philistines, wondering whether he should not trek right down to Egypt where the Nile river ensured good crops every year.  Then, the Lord appeared to him and said that he was not to go there, but to settle in the land He would show him. So he pitched his tents near the Philistine city of Gerar.

The Lord also spoke to him regarding his future, encouraging him and confirming to him the promises He had made to Abraham.

Just when it seemed that life was running peacefully and normally, a problem of a different kind surfaced.  (Isn’t it so that the devil never allows a moment to pass if he has the opportunity of afflicting us?)

This time Rebekah, and that even at her advanced time of life of approximately 60 years was, without having any guilt to it, the cause of the problem.  She still was a remarkably beautiful woman and Isaac got scared that the men of this foreign land in which they found themselves, would kill him for his wife.  Therefore, when they enquired regarding her, he did as his father Abraham had done, answering that Rebekah was his sister.  He was driven by fear and not lead by God.

What Isaac had feared, did not come to pass; yet something almost just as traumatic happened.  One day, as the King was looking through the window of his palace, he saw Isaac  caressing (fondling) Rebecca.  Well, a brother will never do that to his sister!

Without further ado, the heathen Abimelech confronted the believing Isaac.  Isaac was not only caught red-handed for being dishonest, but also for assuming, without good cause, that this King had no moral principles.  What was more: his sinful conduct could have resulted in the King and his people falling into sin by one of them having intercourse with Rebekah, bringing God’s judgement down upon them.  What an embarrassment to Isaac!

Sin is sin and the Lord does not pardon it, least of all in the lives of his chosen ones.  But He is also merciful:  after having used this heathen man to properly chastise his son Isaac, He allowed him to leave in peace of mind, assured that he would have no further reason to fear for his life.  God delivered him from the dilemma.

Christians do not, as a rule, see fear as a sin, yet it has a devastating effect upon their lives and God often had to tell, even command them not to fear.

Firstly, fear brings division between a son or daughter of God and their Heavenly Father for it dampens their spontaneity towards Him, causing them to shy away from Him. Of course  it also grieves Him to be distrusted.

Secondly it also causes the believer to go into all sorts of sin to save himself from a threatening disaster. I am personally aware of a dear son of God that started gambling to pay debts incurred by his wife and ended up by robbing banks and being jailed for the rest of his life.

Thirdly, fear paralyzes a Christian, keeping him from launching out in faith and laying hold of what God has in mind for him.

Do not pity or excuse yourself when you are fearing but look unto the almighty God in faith and He will take care of you. While you are still in fear, begin to launch out in faith and see how fear clears up.

God had also forgiven and forgotten his sin and continued blessing him to overflowing so that even during a year of drought, he harvested a hundred-fold.  The Lord did not end the drought but overruled it.  He acted as if it not even existed.  He does not allow Him to be limited by any circumstances. We may however, by our lack of faith, set boundaries to His blessings by giving more attention to the droughts surrounding us, than to His greatness  covering us.

When God’s people get blessed, the devil get’s mad

God’s blessing did not end with one good harvest; He went on and on blessing him abundantly, so that his herds of small stock and cattle and his other possessions increased incredibly.

This abundant blessing that was on Isaac, did not sit well with his Philistine neighbours; it stirred up their jealousy which turned into hatred, so they filled up with soil, some of the wells which Abraham had dug and which Isaac could lay claim to. Abimelech was possibly hoping that such a show of hostility, would cause Isaac to pack up and leave his domain. In a country where water is so scarce, such acts could have led to warfare, but Isaac endured it patiently. He, “turned the other cheek.”  Then Abimelech confronted him outright, requesting him to move away.

Opening up of old wells

There is a spiritual lesson in this short verse concerning Isaac’s opening up of the wells his Father had dug, and the Philistines had filled up with soil.

A godly man digs deep down into the hidden spiritual treasures of God. This takes much time, effort and searching of the heart and motives. The thirst-quenching water he discovers, is very precious and God wants his descendants to benefit thereby in that they will not have to discover these truths for themselves over a long period of time, but will be able to apply them at a younger age already.

The devil of course, has no use for them and fills up the wells with the soil of worldly thinking and reasoning or even with the muck of sin.

When a son begins to mature in Christ, he will do well to sit with his father and listen to his spiritual wisdom or, if he is no longer alive, read what he had penned down. In this way he will be opening up spiritual wells of old.

Reading what men of God had penned during earlier ages, fall in the same category.

Isaac avoided conflict by moving further away from Abime-lech. He relocated to Beersheba. In so doing he lost some wells and pastures but gained peace and could get on living his life. To fight for your rights, throwing stones and burning tyres, or by just using your tongue as a weapon, is the way sinful man tries to solve his problems, but to let go that which other people unfairly demand of you, requires faith. Such faith pleases the Lord and the reward which He gives, is much greater than what man can take away from you. (Gen 26:22; Matt 5:5).

At Beersheba God appeared to Abraham for the second time, encouraged him not to fear and confirmed to him His promises made to Abraham.  What a reward!

The Lord will not allow that we be tried or afflicted more than we can endure.  At the right time He will provide a way of escape and create space for us.

Now it was Abimelech’s turn to be in a corner and to live in fear, because Isaac and his people became so powerful that he saw them as a threat to their own safety.

Wringing his hands together, he had to go to Isaac, pleading for a covenant of peace.  Just listen to his hypocritical words:

Isaac thought it better not to mention the wells they had plugged and their fighting with his shepherds, but rather prepared a meal for his enemies and conceded to their request not to harm them in any way.

Is it not remarkable that his enemies, at last, had to openly acknowledge:

When we walk with God, other people will become aware that we are favoured by Him.

Let us then use the opportunity to introduce Him to them.