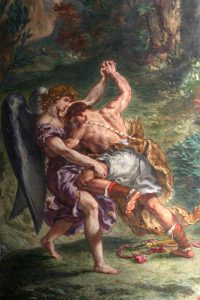 Jacob sees a host of angels

Jacob’s confrontation with Laban and his brothers was, mercifully, now something of the past, but such a conflict renders one emotionally depleted and the meeting with Esau was still coming.  For that reason, his Heavenly Father thought it well to open his eyes so as to see the host of angels that had continually been following and protecting him, as he was travelling the heavenly road down below.

Angels are of course invisible spiritual beings, but are able to appear to man in whichever form best fit for the occasion.  To Abraham they had appeared in human form (Gen 18), but here, to Jacob, they manifested as an army of heavenly beings (32:1,2) to encourage him, letting him know that Esau would not be contending with his small group of people only, but with a heavenly host of mighty angels.  For that reason Jacob called that place Mahanaim, “Two camps”: Jacob’s small camp consisting of his people and livestock and God’s greater camp of angelic beings. (See also Ps 34:7; 91:11; Heb 1:14 and 2 Kings 6:17).  When we are under way at God’s command, we are continually under the protection of the Almighty.

Bad news: Esau is on the warpath and heading your way

Jacob then sent messengers ahead of his laager to prepare Esau for his return to Canaan.  He possibly also wanted to let him know that he had accrued an abundance of property and was not on his way to lay claim to his heritage, which he had left behind.  Esau had, in the meantime settled in the region of Seir, later known as Edom.

The messengers returned within a very short while, bearing the unsettling news that Esau had already come to know about Jacob’s return (possibly from travelling merchants) and was on his way to meet him, accompanied by 400 men (32:3-6).

That definitely was not a welcoming party.  Esau had nurtured the grudge for the injustice he suffered because of Jacob for 20 long years and just hearing his name mentioned, caused a burning urge for retribution to flame up within his heart.  At that time, he had sworn that he would kill him and now the opportunity to do so, had come.  He was out to crush him.

(Family grudges and feuds sometimes run for many generations; also between tribes and nations and many innocent people of later generations who hardly know anything about the original quarrel, suffer because of it.)

Notwithstanding the vision of the host of angels that were continually accompanying and protecting him, Jacob was overcome by anxiety on receiving this upsetting news.  Right away he divided his camp into two laagers and let them encamp out of sight of one-another so that, should Esau destroy the one camp, the other would at least be spared.  At that, his clever human devised plans like wrapping the skins of kids around his arms and laying of branches in the troughs, dried up. Only One could deliver him from this dilemma and so he turned to God in prayer.

A petition that makes sense

He based his petition on three grounds:

God so much appreciates it when we lay before Him irrefutable truths and well-grounded arguments, flowing from a humble heart as seen in his words, “I am too unworthy for all the goodness and mercy which you had shown to your servant …. .“ In other words, “Lord, my plea rests on righteousness, yet I am pleading that You will do it for me by grace”.

Wave upon wave of heart-softeners

After having spoken to God, Jacob did whatever was practically within his reach by sending ahead peace offerings to show his submission and regret, hoping to soften Esau’s heart (32:13-21) and what a multitude of presents he sent!  It was not just a half-hearted show, but a convincing flood of benevolence.

Sometimes we have to pay a huge price to make peace with others or to keep peace with them.  We then do what we can and trust God to do that which we cannot.

When evening fell, Jacob let his wives, children and other people cross through the Jabbok, but he remained behind – probably to have a further period of uninterrupted prayer.

Then something incredible happened.  Suddenly a man emerged from the darkness and lay hold of him.  He had no weapon in his hand, therefore seemingly, his intention was not to kill him forthwith; he wrestled with him as if he wanted to overpower him physically.

Jacob must have been totally taken by surprise.  What was the intention of this stranger’s attack?   There however was no time to be spent on thought, for he had to defend himself with all his might.  Jacob  probably was strong and hardened, used to protect his sheep against onslaughts  from both man and animal and did not only resist him, but tried to overpower him,  bring his attack to an end and compel him to give a reason for his behaviour.  But it was not as easy as that, because the more vehemently Jacob fought, the more power his attacker put in to resisting him, so that it became an evenly matched struggle that continued hour by hour.

As the struggle raged, Jacob must have kept on asking himself what then could the reason be for this meaningless attack and gradually the truth dawned on him that his opponent was no ordinary man, but a heavenly being and that the wrestling match between them, was a combat for life and death which was somehow linked to his conflict with Esau; if he would be able to overcome this man, he would also be able to overcome Esau; if not, Esau would gain the victory. It was a matter of life and death.

Towards daybreak Jacob was at last gradually gaining the upper hand over the stranger. Realizing this, his opponent requested him to let him go for the day was dawning.

Jacob, now` in control of the fight, but also totally convinced that the visitor was from heaven, refused to do so but cashed in on the opportunity to compel Him to bless him, before He would release him.

This was a totally new turn of events which the Stranger could not allow, so, applying His supernatural power, He hit Jacob so hard on his hip bone, that it went out of joint.

The power of the flesh is broken, and the Spirit takes over in fighting the battle

Suddenly the odds were reversed.  In great pain and with only one leg to support him, Jacob realized that he had lost.  But now it was abundantly clear to him that  this wrestling  match was orchestrated by God and that he had to overcome this Man and compel Him to bless him, or else Esau would overcome him the next day and would destroy everything that was dear to him.  But he could no longer overpower him because his manly power was totally broken.  He was now desperate but did not give up on the wrestling match; he only changed his strategy.

While clinging helplessly to his Opponent to support himself, he cried and pleaded (Hos 12:4) to bless him, because without that blessing, he would not survive.  His physical battle had changed into a spiritual battle of faith. He was clinging like a drowning man to the Person that could save him.  The Stranger then asked him what his name was and when he acknowledged that it was “Deceiver” (Jacob) He blessed him spiritually by giving him a new character which He described by the name, “Israel” (Contender with God) because he had wrestled with man and with God and had gained the victory.

What had really happened here?  God had used Jacob’s conflict with Esau to bring him to a point of complete brokenness; a total distrust in his own ability to promote his life by means of manipulation and deceit, and a complete trust in God to manage his life for his own good.

This probably was the most important moment in Jacob’s life and a glorious victory for God’s grace and wisdom to lay lame the sinful character of man so that, by His Holy Spirit, he could ascend to the throne of his heart transforming him into a new being that would display the character of the Heavenly King, his Father.

A trembling deceiver had knelt in the dark of night on the near side of the Jabbok and a victorious soldier of God had walked out on the other side in triumph the next morning.

Jacob’s greatest need was not to be delivered from the hand of Esau: that the angels could have done for him in the twinkling of an eye, but to be freed of his old Adamic nature that had given rise to his conflict with Esau, that was his problem.  Now Jacob reached a new crest in his spiritual development that would lead to a worthy, dignified patriarch for God’s people, Israel.

(Irrespective of the matter for which we are praying, God lays hold of every moment during which we are in intimate contact with Him, to change us into His image.)

By way of elucidation:

In summary:  The blessing for which Jacob was fighting and received that night, although he did not realize that at that stage, was primarily the breaking of the power of self (of his own will) and the imparting of the ability to allow God to let His will and Spirit rule his life.  The old nature would henceforth limp and the new nature in Christ would lead.

From this new position of authority, he would be able to meet Esau in humility but without fear.  Jacob had now laid down the weapon of deceit and had taken up the weapons of the Spirit which Esau would not be able to withstand.

Are you and I willing to do likewise; spending a night or nights in wrestling with Jesus to be delivered from the power of your old nature and to proceed into the future in His power?