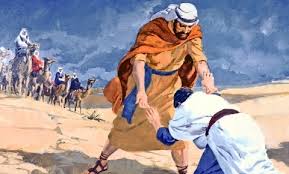 Jacob was now no longer afraid of Esau and walked ahead of his people to meet him. As they were drawing nearer and nearer to one-another, he bowed down before his brother whom he had wronged so terribly; yes, he bowed down not only once, but seven times, approaching the point where they met with one-another.

A wonder of Godly grace took place: the heart of the avenger, Esau, was suddenly broken and he approached his brother not with a drawn sword, but with outstretched arms and hugged him, with tears coursing down his cheeks.  It was not even necessary to discuss the old controversy, because God had already done the work of reconciliation in their hearts and all that now remained, was to weep with joy for once more seeing one-another.

Esau declined to accept the gifts because the Lord had also blessed him to become a rich man, but Jacob insisted to demonstrate his sincerity and in order that the livestock would always be there for Esau to see, should the old grudge again flair up in his heart.

Jacob also, humbly but firmly, declined Esau’s offer to accompany him to his home at Seir, because, after the night during which God had done such a deep work in his heart, he knew that although he and Esau were blood brothers, they did not have strong spiritual ties and would never live together happily and in peace.

He also was deeply conscious of the calling of God on his life and had to go where God lead him.  Just as when Lot and Abram had separated and when Abram had to send Ismael away in order that he would not inherit and live with the called Isaac, God intended to build from the descendants of Jacob a unique nation and in this, Esau and his offspring would be a continual hindrance.  Jacob, therefore, settled at Succoth, then moved further away to dwell at Shechem (33:17-19).

Children of God must, as far as possible, live in peace with one and all, yet at the same time, be very careful of establishing close friendships with them, because such relationships may be detrimental to their relationship with God and to the fleshing out of His plan in their lives.

At Shechem Jacob built an altar and called it, “The God of Israel is God,” (33:20).  The purpose of the altar was to enable him to continually bring sacrifices of praise to God because his heart was flooded with gratitude.  The name he gave to the alter is significant.  He did not call it “The God of Abram and Isaac is God”, but “The God of Israel is God” that is, “My God, is God.”  The Lord (Jesus) with Whom he had wrestled all through that night, had now become very personal to him.

(How personal is Jesus to you and to me?)

B. DINAH AND THE SHECHEMITES (Please read Gen 34) 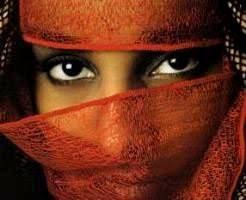 Dinah, daughter of Lea, went forth to get to know the girls of the land.  It was highly uncommon for a young lady, at that time, to venture into a foreign city all on her own.

Maybe she was rebelling, because she was the only daughter and her brothers received all the attention.  Due to the enmity between Jacob’s two wives, Rachel and Lea, the bond between members of the families was weak which resulted in each member acting independently of the rest; everyone for him or herself.

If she really had a desire to explore the nearby city, she could have requested her brothers to accompany her, but it rather seems as if she had run away from home.  Possibly she did not only want to see the girls of the city, but wanted to be seen by the young men of the city.

A butterfly caught in a spider’s web

Unfortunately, she was more successful than she had intended to be, because Shechem, the son of Hamor, the ruler of that city, not only noticed her, but was so captivated by her beauty, that he immediately courted her and eventually, carried away by his sexual passion, raped her.  His conduct was impulsive and disgusting and even his later declaring of his love for her, could not remove the injustice done to her. (Passion is of God but may only be allowed to have its way within the walls of a marriage founded in Christ.)

Shechem did not only sin towards Dinah, but also against the families on both sides and this had serious and painful consequences for all of them, much more than he had foreseen. Sexual misbehaviour always leads to shame and pain.

Hamor and Shechem went a long way in their efforts to put right this injustice by having themselves circumcised, but their motives were not altogether pure. The first reason for doing so, was that Shechem could marry this girl of his dreams, and secondly, there was the expectancy that they would share in Jacob’s riches of livestock and other property.

Why did Simeon and Levy react so drastically?  Jacob’s family saw themselves, and rightly so, as set aside by God, consecrated to be his nation, but did not understand that, to be set aside by God, did not mean that they were better than other people.

They should at least have admitted that Dinah also had to bear some of the blame, for did she not, after the incident, remain at Shechem and not return to her parent’s home? Furthermore, they should have taken into account that their own family were not all that unblemished of character and that unholy sexual desires lurked within them. As will be seen, Ruben, later on, had intercourse with his father’s concubine and Juda slept with his daughter-in-law, Tamar, under the impression that she was a harlot.

Once more, too, we see the sinful line of deceit coursing its way through this family in that Simeon and Levi persuaded the Shechemites to circumcise themselves in order that they could kill the menfolk of Shechem while they were in pain because of the circumcision.

There is a saying, “The apple does not fall far from the tree.”  Their father had spent a night at the Jabbok, wrestling with God to be delivered from his deceitful heart, but they had not yet done so.  These were two very violent men who did not hesitate to murder all the menfolk of Shechem.  At his death, Jacob would later curse them instead of blessing them (Gen 49:5-7).  Jacob’s other sons too, were not without blame and should legally be seen as accomplices after the act, because they looted the desolate city, taking everything for themselves: women, children, livestock and other possessions.

This truly was a blotch on the name of the Jacob family.  Had Jacob raised his children properly in the fear of the Lord?  His parents had not been good role models for him and he and his wives, in turn, were not good examples for their children to follow.  But this was no excuse for the sons’ behaviour: they had become grown men and should have walked the narrow road of righteousness, although they had not been well trained to do so.

A person must never blame others for his own misconduct.  Everyone must accept personal responsibility because God will keep each one personally accountable for what he or she did.

Once more, we note clearly that even the children of believers come into this world with sinful hearts and can only become children of God by being born again.