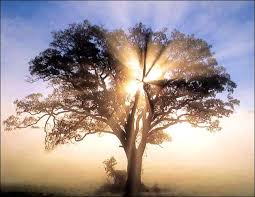 Jacob, of course, was very upset because of what happened and also feared that the other inhabitants of the land would take revenge on them.  (This time, at least, he himself was not the scapegoat.)

Yet they did not flee from Shechem but waited on God to command them to move away from this area where they had defiled their name and to settle at Bethel.  In so doing, the tension in the community would be diffused.

Before departing, Jacob decided that it was necessary to interrupt all the farming activities and to thoroughly cleanse everyone in his camp.

He realized that all kinds of unclean behaviour had stealthily seeped into their midst and commanded that all the idols and earrings (that possibly were worn because of superstition) be delivered to him.

This certainly would not have happened without a measure of protest and sour facial expressions, especially from amongst the ladies, but after the camp had been cleansed from end to end, Jacob buried all these items under the oak tree outside of Shechem. He could not burn them, because many of these were made of silver and gold. (As mentioned earlier on, some of these idols were possibly lucky charms; yet they were things in which the owners trusted, instead of placing their trust in God.)

After this Jacob commanded each and every one to wash himself thoroughly and put on clean clothes.  This was a symbolic act, pointing to the cleansing of their hearts.

(In that dusty country where man and livestock lived very closely together, they would in any event have done well with such a thorough scrubbing.)

And so, after a couple of days, they stood there like children on their first day at school, shiningly clean before father Jacob who scrutinized them carefully but also with compassion.

Now they were ready to enter into a brand new future and the moment when they packed their belongings and got moving away, a remarkable thing happened:  the fear from God came over  all the inhabitants of the land so that they did not pursue Jacob and his people to take revenge on behalf of the Shechemites.  This was God’s response to Jacob’s people’s spiritual humbling of themselves.

Here the Lord again appears to Jacob, blessing him and confirming His promises as well as his new name, Israel (39:9-12).

The Lord’s grace over His children is immeasurably great, He does not chastise them according to the measure of their iniquities, but forgives them, placing their debt on the account of His Son Jesus Christ Who settled the full account on Calvary.

Notwithstanding all their shortcomings, the Lord uses them, often in key positions in His Kingdom, and on top of it all, He rewards them for that in the hereafter.

It is also interesting to note that Jacob often erected memorials in places to be remembered for what God had done for him there, even anointing some of them with oil.

Oh, how short are our memories and how quickly we forget the great things the Lord did for us.  A diary or notes in the margin of one’s Bible can be of great help.

Rachel passed away at a later date, on their way to Bethlehem.  It happened when she was giving birth to her second son, Benjamin (35:16-20).

Jacob was notified that his father, Isaac, was nearing the end of his life and went to visit him at Hebron.  Esau also travelled there and so the two brothers, together, took leave of, and buried him (35:27-29).

The Lord was remarkedly good to Isaac by affording him the joy of seeing his two sons reconciled before his death and to hear of the great blessings God had bestowed on them.  He also had certainty as to where he would be buried.

Something of a wonder must have happened to him after the incident of Jacob’s blessing. At that stage he was 100 years old, blind and expected to die soon for he called in his son Esau to lay the basis for his taking over of his estate Now, however, we read that he only died 80 years later. At this time Esau had also moved away to Seir, while Isaac remained at Hebron. Had he recovered to such an extent, even his eyesight, that he had managed to direct his own affairs?

As a young man, he had been willing to sacrifice his life as a burnt offering in obedience to God and to his father on an altar on the mount of Moriah.  Was God not perhaps rewarding him for his sacrifice, by keeping him in life up to the age of 180 years, 5 years longer than even his father Abraham had lived?  What a beautiful and blessed end!

“Honour your father and your mother, that your days may be long in the land which Yahweh your God gives you.” (Ex 20:12, WEB)

Now we can take a deep breath after all the stress we experienced while accompanying Jacob on his life’s journey up to this point. For him, there would still be several mountain ranges to cross over, rivers to pass through and tears to be shed before he too could, leaning on his staff, shuffle over the finish line.

These twelve sons became the patriarchs from which God built His people, Israel (30:21-22). They were Jacob’s contribution to God’s earthly kingdom to be.