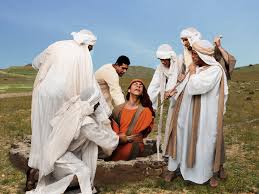 The ten brothers away from home

In those days, of course, the land was not cut up into farms as we have it today, and livestock farmers moved about with their herds to provide them with the best pasture.  For this reason, Jacob’s sons., excluding Joseph and Benjamin, (as we can deduce from later happenings) moved with their livestock from Hebron, where Jacob’s camp was, to Shechem; probably some 80 km’s further North.  There was little opportunity to inform Jacob on a regular basis how they were, with the result that he got concerned and sent Joseph to go and look for them, then return and inform him.

Joseph dispatched to search for his brothers

Joseph, a young man of 17, immediately agreed for he had probably also become bored, staying at home and it would be exciting to travel such a long road on his own.

On arriving at Shechem, an area where they had previously dwelt, he could however not find his brothers.  Having roamed about for a considerable time, he met a man who told him that he had heard that they had relocated to Dothan. After a further 40 km travel, Joseph at last found them there.

The plot to murder a brother

But this was not a joyful reunion of relatives. They had noticed him when he was still a long way off and his beautiful robe, which his father had presented him with, immediately caused their hatred of him to flame sky high.

Before he even reached them, his destiny was sealed. “Now just look, there comes the dreamer,” one of them called out!  “Let us kill him,” many of them echoed!  Reuben however, the eldest brother and leader, felt for him, and especially also for their father, and quickly thought of a plan to save his life and allow him to return home safely.  “No, wait, let us not do such a harsh thing like murdering him and getting his blood on our hands.  Let us cast him into that dry well so that he can die in his own time,” he suggested.  He did this because he intended to return without their knowing, pull him out and send him back home.

A godly young man walks into a death trap

So, when Joseph, excitedly and not expecting any danger, ran up to them and greeted them, they grabbed and stripped him of his beautiful robe, which they so much hated.  Initially he must have thought that they were just joking, then realized that his life was at stake and hit and kicked with all his might, but against such odds he had no hope.

They dragged him some distance up to a dry well.  He cried and plead (Gen 42:21) but the next moment they swung him over the edge so that he tumbled down to the bottom.  Dazed from the fall, he lay on the moist sand, then sat upright, listening, but it was absolutely quiet. Only the patch of blue sky was to be seen way up top, unreachable, and he realized with shock that they had left him there to perish from hunger and thirst.  He explored every option to get out, but the hard, vertical sides offered no hope.  Here, no one would find him, because the other shepherds in the area knew that this was a dry well and would not go there.

The Bible does not relate what then happened but let us try to construct our own picture. For hours on end he probably sat like this, miserable and fearful. Then he faintly heard voices of people approaching and suddenly saw the faces of his brothers peering down over the edge.

He lifted up his hand, waiving at them uncertainly. “Would you like to get out,” one of them called? “Grab hold of this rope and tie it well around you!”  His heart rejoiced, then, after all, it was just a cruel joke.  He tied the rope round his waist, then called out, “Okay, pull!”  He felt the robe tightening and gradually he was lifted higher and higher until he could crawl over the edge on hands and knees.

A dream turns into a nightmare! 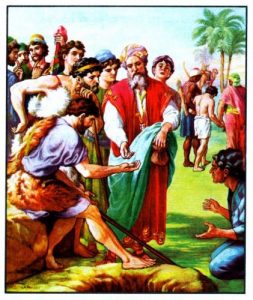 He was crying, so relieved was he, but through his tears he became aware of more people, Ishmaelite traders.  Confused, he saw the leader looking him up and down, then counting a number of coins into one of his brother’s cupped hands, saying, “Only twenty pieces of silver, no more.  That is the going rate for a slave and just see what he looks like.  He might not even live out the rest of this day.”  The next moment, one of the other traders, grabbed him, bound his wrists together hobbled his legs and tied him behind one of the camels.

Suddenly it struck him, “A slave, that is what I am, a slave, being carried away to Egypt.”  “Farewell dreamer,” some of his brothers, mocking, called after him.”  “Are you not your father’s blue-eyed boy?  His heir?  Now we will see what your dreams will come to.”  And slowly the caravan disappeared into the distance.

Too late for tears

Reuben, Jacob’s first-born, who had been absent from the group for a while, possibly to see to some of the livestock further away, eventually returned and immediately, stealthily, went to the well to remove Joseph from it and send him home, as he had originally planned, but … Joseph was gone. What had happened to him, when, how?

He realized that something seriously was amiss and tore his clothes in dismay, ran to his brothers that were sitting some distance away and shouted, “The boy is not there! And I, where must I turn to now?”

Sinning to cover their sin.

Having told him what they had done with Joseph, they realized that there was now no way of undoing it.  Of one thing they were certain and that was that they were now for ever rid of this thorn in their flesh.

One sin lead to the next; now they had to deceive their father to cover up their sin.  They dipped Joseph’s robe in blood and returned it to Jacob with a messenger, inquiring whether it did not perhaps belong to Joseph?

Forever living with a corpse in the cupboard

Their evil deed did not only affect Joseph, but also their father.  He would not be comforted.  Year by year his grief would remind them of what they had done, and they would certainly have asked themselves the question again and again, whether it had been worthwhile to allow their jealousy to drive them to such lengths.  Continually they would live in fear that their evil deed would be discovered.  Repeatedly they would have to tell the lie to everyone inquiring of Joseph.  The consequences of a deed committed in a moment of thoughtlessness, may endure for ever.

We do not know what the future holds, but we know Him Who holds the future.

Regarding Joseph: how quickly and unforeseeable can a person’s life take a totally new direction; one moment he was the carefree, favourite son and probably the heir of a very rich man and the next moment he was a slave with no rights at all.

Jealousy has no mercy

Jealousy leads to inhuman cruelty. Jealousy nailed the Lord Jesus to the cross.

Joseph’s brothers had no reason to be jealous of one-another, least of all of their younger brother. Every one of them was destined by God to live in the best part of Egypt, to have ample provisions for their households and flocks and to become the patriarch of one of the tribes of Israel. If only they had trusted God and had waited on Him, they would have had it all without committing such a base crime.

Let us also note how jealousy had torn apart this family who believed in God and were His chosen people.  The devil certainly is a hater of mankind and concentrates on destroying families.

We too need not be jealous of one-another, because God has more than enough resources for each one of us in this life, and in the life hereafter an eternity in heaven with Him.