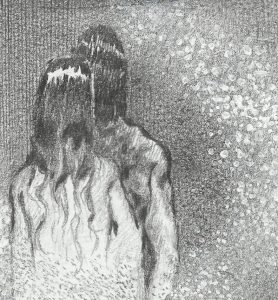 A. SPECIFICATIONS FOR THIS SUPER BEING GOD HAD IN MIND

The sixth, was a very important day of creation, for on that day God would reach His goal of creating a super being that would resemble Him in many ways. Man was to be like God (of the same kind), although not equal to Him. We will now look at some characteristics he was to have.

God is not accountable to anybody and can do as He pleases. The animals had some freedom to choose but they were very much bound by the code of life (DNA) which God put in them and would always live within those boundaries. Although they did not even know that there was a God, yet He was their owner and supreme ruler and that was it.

Man would have to have much more freedom of choice to resemble God to a greater degree than the animals. He had to have the choice whether he wanted God to be his God (the supreme ruler over his life) to such an extent that he would become one with God or whether he would rather be his own God and make his own decisions in all spheres of his life. If he had no choice in this matter, he would be no more than an animal.

In order to make an informed decision, he had to be very, very intelligent for he had to be able to inspect, understand and evaluate the things God had created and conclude whether they were good or not; the earth, the seas, the vegetation, fish, birds and animals, food and water supply, the climate, and also himself and conclude whether He was indeed an all power, all wise Perso. He also had to judge from his personal encounters with God whether He was a holy and infinitely loving person Who could be trusted implicitly with his life. He had to compare himself with God, see how much greater God was in every respect and the submit himself willingly into God’s hands. Only such a well thought through decision would be acceptable to the Lord. This was a great risk, but God was willing to take it.

He had to be a friend to God, a son to the Father and a bride to the Son.

You see what I mean? This kind of relationship the farmer could only have with his children; it lies at a much deeper level. God wanted a being He could interact with in a way He could not do with His animals.

There is a vast difference between a servant and a wife: a man may hire a capable woman to serve him, agree upon a monthly wage, give her a list of duties she is to perform and then take little further notice of her.

When he sits down on the settee to enjoy a TV program for a while, he will not invite her to join him and when he catches her peeping around the doorpost, he may warn her to get on with her duties.

Not so when a man marries a wife (I am now speaking of a Christian man taking a bride). When standing before the pulpit, will he read her a list of duties and demand that she answer, “I do; I understand and will do all that.” No, no, what will bless him most, is to see her eyes sparkle with excitement and hear from her very lips the words, “My dear husband to be, I love you with all my heart and will do whatever I can to make you happy.”

When he and his wife settle into the home, he prepared for her and he sits down to watch the TV, he will be so delighted if she joins him and cuddles up against him without being requested to do so. That will make his heart to overflow and to try to give her whatever he can to make her happy.

Yes, there will be a certain lifestyle in their home and they will each perform certain duties to keep the household running to their best advantage, but these duties will be founded on love, respect and logic and not on strict rules and punishment if the wife failed in something.

Why do I emphasize this point so strongly; because most people, even some Christians, see God as a very strict taskmaster, almost as a jailer that lays down rules and whips the hide off your back if you dare to break any of them.

If you ask them: “What does God require of you?” they will reply, “I must not drink and smoke and I must go to church.” They will not reply, “He wants me to like Him very, very much and to enjoy spending time with Him. He especially likes to sit down and listen to love songs I sing to Him. He also loves to hear me speak good of Him wherever I go. He is soft and merciful and when I stumble, He picks me up right away.”

God needed a very responsible, capable person whom He could appoint and trust to take care of His creation, who could protect and develop it.

This being had to have a physical body so that the animals could hear him calling them, speaking to them, feeling the tender touch of his hand stroking them, see the love in his eyes when they looked at one another. In short, He was to be their God as the God Who they could not know was his God. God could not fulfill any of these needs they had for He was a Spirit.

This manager God had in mind was also to be someone He could share His thoughts with, discuss the further development of the earth with, someone that could think and plan and would get back to Him and say, “How about blessing the fruit bearing trees for the monkey population is increasing rapidly and may need more peaches, mangoes and grapes to feed their offspring?” And the Lord would reply, “That’s a good idea. Good that you have noticed this need. I will do as you suggested and speak a greater abundance over those trees.

And how are the hippo’s doing? Does the Sidon river provide sufficient water for them to submerge their bodies into?”

Man was to be much more than what we would call a servant that only carries out instructions; he was to be a co-worker and junior partner.

B. THE CREATION OF MAN

To create his body there was no need for God to create new materials to use. He used the soil for it contained the building blocks from which man’s body could be constructed and He formed and changed the soil into a body of bones, flesh and blood. It had a head, hair, brain, eyes, ears, nose, mouth and all the rest including arms, hands, chest, heart, lungs, stomach, intestines, arteries, legs and feet. It lay there perfect but without life, not breathing. The soil from which he was created made him part of the earth.

To give him a spirit He breathed into his nostrils the breath of life from his innermost being into his nostrils (Gen 2:7). Nowhere is it said that God breathed life into any of the animals, only into man. By His own breath, from His inner being, God transferred a spiritual component into man for him to become a living soul, unlike an animal. Having a spirit made him to be like God Who is Spirit.

Can you see God bending over man, putting His mouth over his nose, then breathing life into Him? Oh, how intimately He associated with man, not just speaking a word over a long distance from heaven, but kneeling right beside him, making contact with his lifeless body. He was giving birth to this first human being as a mother imparts life from her own body to the child she is bringing into this world.

God, being a person with emotions, must have been excited like a father or mother witnessing the birth of their first child.

For man too, this was a significant moment for the first face he saw on opening his eyes, was that of God looking lovingly down upon him.

He also had the following abilities of God, yet to a lesser degree:

As said, God wanted beings with whom He could have intellectual, spiritual and emotional interaction. Just think of one’s children.

Through these human beings that He created, God would have contact with the rest of his creation and would be able to manage it to perfection according to His own will.

As for man, since he consisted of both body and spirit, he would be able to have contact both with the physical creation, on the one hand, and with God, on the other hand.