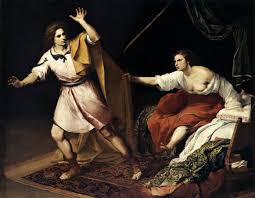 After a long trying journey of some 30 days which he probably had to travel on foot, Joseph was led into Egypt where he was auctioned like a piece of merchandise.  Since he was young and good looking, he probably reached a good price when bought by an important man, Potiphar, the officer in charge of Pharaoh’s bodyguard.

Adjusting to a foreign land

For Joseph, all of this must have been an indescribable traumatic experience and on that long dirt road to Egypt, he must have continually been asking himself the question whether his dreams had just been his own fantasies.

An unexpected cultural shock also awaited him; from a peaceful nomadic way of life, he was suddenly transferred into a city, teaming with people to which he had to adapt himself, and on top of it all, he was brought into a rich and important man’s house where there was a great flow of people.

He also immediately had to begin to acquaint himself with this foreign language to be able to interact with the people around him and to understand the assignments of his owner’s assistants.

Worst of all, there must have been many idols being worshiped and pressure put on him to participate therein.  But amid all these temptations and trials, he stood firm and persevered in serving the God of Abraham, Isaac and Jacob, and Him only.

Joseph could have been lazy and rebellious, rendering a poor service because, as a slave, he received no salary.  But no, he did his very best.  Though he had no Bible or any portion of Scripture with him, he demonstrated that the will and ways of God were written on the tables of his heart. In fact, he did as we as Christians are told to do Eph. 6:5-8):

Servants, be obedient to those who according to the flesh are your masters, with fear and trembling, in singleness of your heart, as to Christ; 6 not in the way of service only when eyes are on you, as men pleasers; but as servants of Christ, doing the will of God from the heart; 7 with good will doing service, as to the Lord, and not to men; 8 knowing that whatever good thing each one does, he will receive the same again from the Lord, whether he is bound or free. (WEB)

No wonder then that the Lord’s blessing rested on everything he did.  He was separated from his family but not from his God.  He was stripped of his royal garment but not of his principles of honesty, zeal and dependability.  At the start he probably would have been given the most menial work to do, but he applied himself to it with abandonment.  His supervisors noticed this and allocated more responsibilities to him until his lord himself saw that God was with him and appointed him over all of his estate, no longer taking care of anything himself.

Life so often is what you make of it.  Joseph probably enjoyed more peace and joy here in Egypt than did his brothers as free men in Canaan.  By walking uprightly with God, you can make a Canaan of your Egypt and by living a bad life, you can turn your Canaan into an Egypt.

Uprightness, a clean conscience and a heart that forgives others for what they had done to you, is like a soft balm that heals your inner wounds.  Jealousy, carrying of grudges and a guilty conscience on the other hand, are like whips of barbed wire that inflict fresh wounds and new pain every hour; it is like being locked up in a jail with cruel, revengeful warders.

God’s diamond in an acid test

Joseph had passed his first test by accepting his fate as slave cheerfully, but there would be many more.  The next one was aimed at his sexual life, an area in which young people are very vulnerable.

He was indeed a very attractive young man and in this the devil found an opportunity to further scourge him.  The woman he would use was not just a common servant girl of which, certainly, there were many trying to catch his attention, no, it was the wife of Potiphar that enticed him to have intercourse with her; and God allowed her to do so. When they were alone at home, she grabbed him, but he tore himself loose and fled from the home.

Let us note the reasons why he refused to succumb to her desires:

Someone said that there is no fury like that of a woman scorned.  Potiphar’s wife’s pride was scorned, and she retaliated by falsely accusing Joseph with her husband before he would have the opportunity of reporting the incident himself.

Potiphar might have had his doubts regarding what had happened behind the screens, but had to uphold his honour before his people and did so by casting Joseph into jail.  (Possibly Joseph refrained from defending himself so as not to hurt his master by telling him what a bad wife he had.)

Not all admirable choices are rewarded in this life

Although a person may serve the Lord with all his heart, it is no guarantee that he will be rewarded for it in this life by the people affected by his conduct treating him justly.  The devil will hate such a person, lie in ambush for him and bring all sorts of disasters across his way in an attempt to quench his faith.

How did he cope?

When we were studying the life of Abraham, we saw that the Lord had often, during the 20 years that he had to wait for God’s promise of a son to be fulfilled, visited him and spoken to him to strengthen his faith, especially when he began to doubt.

Also in Jacob’s life it happened more than once that God met him on the way and encouraged him, but as far as Joseph is concerned, nothing like this is recorded in Scripture.

Was his faith indeed so strong that he never became uncertain whether God was still with him and that his two dreams of rulership would become true?

There, in jail, Joseph did not loose heart because he had been treated unfairly, but distinguished himself as a model prisoner so that the chief warden appointed him in a position of authority.  Although the prison’s keys hung from his belt, he did not try to use them to escape, because he was waiting for the day when God Himself would unlock the door for him.

When we land up in a difficult situation, we need to hear from God whether we are to accept it as coming from Him, or try to get out of it.  When a prisoner escapes, but is caught and returned to prison, his punishment is so much more severe.

The same happens when we look for a way out of a tough situation against the will of God.  He will just allow that we land up in a different prison, because His greater purpose is for our character to be shaped; to develop our ability for long-suffering and our faith, and to achieve that, the “prison” is sometimes better than a carefree vacation at the seaside.

The prison in which Joseph was kept, sometimes also housed senior court officials like the Pharaoh’s baker and cup bearer who had displeased him.

The warden put them under Joseph’s care.  He would treat them with dignity but could also be trusted not to allow them to escape. (Comparing 39:1 with 40:3 it would seem that Potiphar, the officer in charge of Pharaoh’s bodyguard, also was the chief warden of the jail.)

A heart for prisoners

One morning Joseph noticed that these two prisoners were very perturbed.  He inquired what the reason was, and they told him that they both had a very disquieting dream.

In this we see another correlation between Joseph and Jesus.  Just as Jesus, when He was suffering terrible pain on the cross, still had an encouraging word for one of His fellow sufferers, Joseph too, did not only think of his own plight but also had a heart for the suffering of others and offered to help them.

The dreamer uses his spiritual gift 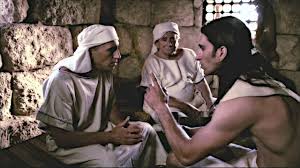 He encouraged them by saying that there was a solution for their problems in that the same God from Whom their dreams had come, also knew the meaning thereof and could reveal it to them.

The cupbearer then told Joseph of his dream who immediately revealed the meaning, namely that within three days he would be restored to his former position.

Joseph’s attempt to be released from jail

Here we are also afforded a little insight into Joseph’s own heart when he tells the cup-bearer how he himself had been stolen from his country of birth and how, there in Egypt, had been committed to jail although he had not been guilty and then asking him to do a good word for him with the Pharaoh.  How long he had been in jail, we do not know, but by now it had been eleven years since he had been sold as slave.

A true prophet: a mouthpiece for God

Encouraged by the favourable interpretation which the cup-bearer received, the baker also shared his dream with Joseph who immediately interpreted it for him; but this dream had an unfavourable explanation in that it revealed that the baker would be hung.

To be a truthful messenger for God, is not always a pleasant task, because sometimes we will have to tell people things they would rather not know.

(This ability to reveal the hidden things of God, can be compared with the Holy Spirit’s gift of “a word of knowledge” mentioned in the New Testament in 1 Cor 12:8.)

The test for a true prophet

Joseph’s revelations came true to the last letter when the cup-bearer was reinstated in his post within three days and the baker was executed.  This confirmed that Joseph was a man of God who was unjustly imprisoned.

The cupbearer however forgot about Joseph and did not mention him to the Pharaoh.  The Lord did not bless Joseph’s attempt to be delivered from jail, because He, Who knows the depth of every man’s heart, saw that he needed more molding before He would be able to use him in the way in which He had pre-ordained.

God’s purpose with this incident

Why then had the Lord orchestrated the whole episode regarding the dreams?

As regards the baker and cupbearer, one cannot really see the reason why the Lord would favour them by revealing to them three days in advance what would happen to them.  No, as far as God was concerned, it was more about Joseph.   By this incident He wanted to strengthen Joseph’s faith so that he would not doubt the promise he himself had received from God by his own two dreams. He had to continue believing that the day would come that God would extol him like the cup-barer and appoint him as a ruler.  Similarly, the Lord would take revenge for the injustice done to him, just as the baker had to pay for the wrong he had done.

Take the lesson to heart

We must commit our future to God alone.  As long as we obey Him, we remain on course, although we will not be able to see the end of the tunnel.

(The Lord would also, much later, still use the cup-bearer to bring about Joseph’s deliverance.)