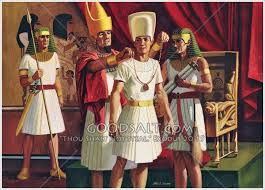 Two years after the episode with the cupbearer and baker, the Pharaoh also had two dreams, namely those of the lean cows and sheaves that devoured the fat cows and sheaves but gained nothing in the process.

He was much upset by these dreams, the more so, because his magicians and soothsayers who were paid from Government funds, were unable to reveal the meaning of his dreams to him.

Only then did his cupbearer recall how Joseph had told him what his dream meant.  On sharing that with the king, he commanded that Joseph be brought to him immediately.

Joseph’s testing period in God’s university had now run it’s course and God considered him ready to be used as His instrument in Egypt for a very specific purpose.

Having listened to Pharaoh recalling his dreams, Joseph told him that he (Pharaoh) had received a revelation from God of what He was planning to do.  He was going to give seven years of abundant harvests, but thereafter would follow seven years of terrible drought that would devour all the surplus of the previous seven years.  The dream was repeated because the Lord was firmly committed to carry out what He had designed.

Joseph, endowed with the wisdom of God, in the same breath also boldly, recommend to the Pharaoh to appoint overseers to gather in 1/5th of the yield of the good years and to save that up for the dry years.

This council was immediately accepted by both the Pharaoh and his counselors.

The Pharaoh also realized that something supernatural had occurred and who but Joseph who was in direct contact with the unseen, almighty God was better qualified to direct this God given plan?  So, He summarily appointed him as his second in command who had to carry out the directions received from God.

God does as He pleases

God used supernatural means (dreams and their interpretation) to establish His plans.  It is so easy for Him to persuade even a mighty king to do what He wants to be done.  He can appoint whosoever He wishes in whatever position He wants.  He has all power in heaven and on earth and can use anything and anybody within His creation to accomplish His sovereign will.

After 13 years of lonely perseverance in faith and obedience, Joseph now sees his own two dreams fulfilled.  Thirteen years was actually a short period for a humble shepherd to be escalated to the position of vice-president of such a mighty, foreign country.  He was only 30 years of age when that happened and proved himself a worthy great-grand-child of Abraham, the man of faith.

The appointment as deputy ruler over Egypt was accompanied by great honour bestowed on Joseph.  The Pharaoh also gave him a wife called Asenath.  Two sons, Manasseh and Ephraim were born to him. These names, given to them by Joseph, are a revelation of the thoughts of his heart (41:51 & 52):

So great was the blessing with which the Lord blessed Joseph, that he forgot all the trouble and hardship he had to endure for 13 long years; what a wonderful testimony.

What is in this for you and me?

It reminds of God’s promise in Jer 29:11 on which you and I may also rely:

For I know the thoughts that I think toward you,” says Yahweh, “thoughts of peace, and not of evil, to give you hope and a future. You shall call on me, and you shall go and pray to me, and I will listen to you. (WEB),

When we walk through the gates of heaven, the memories of our suffering on earth will fall from our shoulders like a cloak. (See also Heb 12:2).

Had Joseph really forgotten his family?

When Joseph says that he had also forgotten the house of his father, it certainly does not mean that he had forgotten his loved ones as persons, but rather that he no longer looked back, longing for the blessings which he had enjoyed in the home of his father, for they could not at all measure up to what he was now experiencing.  That he was still dearly cherishing his family in his heart, we will see later on when we read about how they were re-united.

The conscientious Joseph personally crisscrossed the country, seeing to it that all the surplus grain was stored away in the cities to provide for the drought that would follow after the seven years of abundance.

Then, at the end of seven years, a famine came over Egypt and all the surrounding countries, just as Joseph had prophesied.  From the most remote places thinkable, people flocked to Egypt to buy grain because the “famine was severe in all the earth” (41:56, WEB).

Just imagine the enormous revenue it generated for the land of Egypt.  Also, in this, the selling of the grain, Joseph was the center of the process, the man on who the Pharaoh fully relied, knowing that he had both the wisdom and the honesty to do the best for his country.