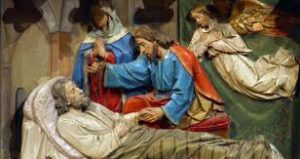 Having received all these wonderful blessings from the Lord, Jacob’s heart was filled with gratitude, so he brought sacrifices to God.

To leave the promised land, Canaan, and relocate to Egypt with all he possessed, was however a major step for Jacob; was this the right thing to do?  He might have thought what had happened to Abraham when he sought refuge in Egypt during a similar harsh drought (12:10-20).

We must consider other people’s suggestions, but how tempting they might be, not just act upon them without enquiring of the Lord.

The Father speaking to His son

The Lord read Jacob’s thoughts and replied to him very clearly in a dream:

After Jacob had personally heard from God, he traveled down to Joseph in Egypt with a joyful heart.

Abraham’s offspring had now increased to approximately 70 souls.  Joseph had gone to Egypt as a slave; his brothers almost as beggars to procure food for their families, but now the whole convoy is transported with royal wagons and the best part of Egypt is allotted to them.  All of this happened because Joseph had been willing to pay the price which God required of him for 13 long years.

At last, after 22 years of grief, Jacob and Joseph again hugged one-another, tears of joy coursing down their cheeks.  Jacob’s cup was overflowing and, in his spirit, he felt fulfilled; the purpose for which God had placed him in this world, and to which he was called, was now accomplished.

An earthly king meets a prince of God.

Then Jacob was brought in to meet with the Pharaoh.  He had blessed Joseph by removing him from jail and appointing him over all of Egypt and God had then blessed the Pharaoh and his country with an exceeding great blessing and made them to be a blessing to the whole world.

God’s servant, Jacob, also spoke a greeting of blessing over the Pharaoh, both on meeting with him and on departing.  This calls into remembrance God’s promise to Abraham:

“You will be a blessing. I will bless those who bless you, and … all the families of the earth will be blessed through you.” (Gen 12:3, WEB).

When last have you updated your daily cash book?

In the course of the conversation, Jacob said to Pharaoh that he was still young in compassion to his forefathers and that his years had been filled with adversity and misfortune.

That he had indeed gone through difficult times, was quite true, but much of that he had brought upon himself.  Now however, the Lord was wiping out much of the pain of the past, offering to him a breath-taking, ”retirement package.”

This calls to mind the well-known song, “Count your blessings one by one and you will be amazed at what God had done”.

Of Jacob’s descendants, only two grand children had died, namely Er and Onan, because they had displeased God, over against the 70 that had been preserved, and on top of that, one of his sons, Joseph, was promoted to the second most prestigious position in the world of that age.

At a time when thousands of people of the surrounding countries were perishing of hunger, Jacob and his people were lavishing on the cream of Egypt’s produce without having to pay a single piece of silver for it.

It rather seems as if the sum total of the patriarch’s blessings vastly exceeded his misfortunes. (Or what am I saying Jacob?)

Jacob and his families’ stay in Egypt was exceedingly blessed:

“Israel lived in the land of Egypt, in the land of Goshen; and they got themselves possessions therein, and were fruitful, and multiplied exceedingly.”  (47:27).

Although they possibly were not aware of it, God was building them into a big nation, a nation that would be able of conquering Canaan.

At the age of 147, after 17 years of peace and quiet, Jacob realized that his hourglass was running out, so he called in Joseph and made him swear that he would not bury him in Egypt.  Egypt, with it’s ever-flowing Nile river and it’s green fields, was wonderful, but in faith he already saw how his offspring would be lead forth by God to take into possession the promised land, Canaan, and his heart yearned to be part of it.

That of course could not be, because another 417 years first had to be ticked off one-by-one on God’s calendar.  The Canaanites’ cup of judgement still had to fill up, and for Israel, tens of thousands of young soldiers still were to be born.  But Jacob’s faith crossed this period in one great leap. He himself would never experience that glorious day, but if only his bones could, in the meantime, rest in that country, he would be contented.

What have I laid up for the final day?

Jacob now escalated Joseph’s two sons, Ephraim and Manasseh, to equal status with his own sons, gave them in advance, by faith, a piece of land which he had conquered from the Amorites, and declared prophetically that the first born, Manasseh would be subject to the younger Ephraim.

God promotes who-ever He pleases.  In that we must rest, knowing that He dearly loves each one of us; so much so, that He gave His Son to lay down His life for us on the cross.

Then he also blessed his other sons, prophesying over them as regards their future.  Reuben was denounced as first born because he had succumbed to his physical desires and slept with his father’s concubine, Bilhah.  Over Simeon and Levi, God’s judgement was pronounced because of their deeds of violence.

Judah was uplifted above his brothers:

“Judah, your brothers will praise you. Your hand will be on the neck of your enemies. Your father’s sons will bow down before you. Judah is a lion’s cub. From the prey, my son, you have gone up. He stooped down, he crouched as a lion, as a lioness. Who will rouse him up? The scepter will not depart from Judah, nor the ruler’s staff from between his feet, until he comes to whom it belongs. To him will the obedience of the peoples be. Binding his foal to the vine, his donkey’s colt to the choice vine; he has washed his garments in wine, his robes in the blood of grapes. His eyes will be red with wine, his teeth white with milk.”

This prophecy refers to the Messiah, Jesus Christ, the Son of God Who would be born from Judah’s offspring (49:8-12).

Joseph and his descendants also received special blessings of prosperity.  That, perhaps, could be linked to his sacrificial life that had led to the preserving of the lives of hundreds of thousands of people.  What man sows, he will also reap.

Then while Joseph was still present, Jacob’s spirit departed to where those of his ancestors, Abraham and Isaac, were already gathered before the throne of God.

Joseph organized for Jacob’s body to be embalmed so that they would be able to transport it. Then, accompanied by his brothers and a multitude of Egyptian dignitaries, he traveled to the cave of Machpelah where they laid the saint’s remains to rest as he had requested.  It is remarkable how much honour this man of God received even after his death.

After Jacob’s burial, Joseph’s brothers once more pleaded with him to be forgiven for what they had done to him.

They had not forgiven themselves and therefor just could not believe that Joseph had forgiven them. They thought that he had only stayed his revenge reverence of his father and that now that he had passed away, would at last reckon with them.

Their inability to accept his forgiveness, deeply upset Joseph, causing his tears to flow and again he reassured them of his total forgiveness and goodwill.

How much is our Lord Jesus not also grieved when we repeatedly plead with Him for forgiveness and are unable to accept that He freely forgave us on the basis of the forgiveness of sins which He worked for us by His death on the cross (Ps 103:12).

Going Home but expressing his faith till the end

A father had followed his son to a land of plenty, now that son would follow his father to a Kingdom of everlasting abundance.

At the age of 110, Joseph’s role was also fulfilled, and the time came for him to go Home.  So certain was he of the fact that his descendants would go up to Canaan from Egypt, that he bound his brothers by an oath to take his body with them.

Then he died and was his body embalmed so that it would be preserved till the day the nation of Israel would depart for Canaan – and this literally happened hundreds of years later (Ex 13:19).

What a blessed ending for this man of God from who’s life we could learn so much.

What a beautiful closing chapter also to the book of Genesis, a unique portion of Scripture which God gave to mankind to teach and guide us on the way to the House of the Father, the House of Adam, Noah, Abraham, Isaac, Jacob and Joseph and the thousands of other men, women and children who walked before the face of God and completed the race up to the very end.