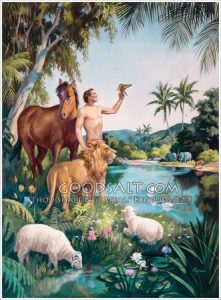 They were to do the following:

When God gave these instructions to man, He also blessed and empowered them to fulfill His desires.

This is a great encouragement for us too; to know that if I am in a certain position because God placed me there, He will bless and empower me to fulfill my duties to His and to my employer’s satisfaction.

Let us consider some of these functions.

Multiply and fill the earth. To multiply, mankind had to apply their physical, sexual, abilities, which they were well able to do, being of different sexes. To parent (beget) a child (the first child ever) and bring it to birth, must have been an ecstatic experience, a sense of power and value.

As God was able to create creatures, they would, in a sense, also be able to do. These would however be formed according to a God given DNA.

Just like God took responsibility for whatever He created, they too had to take care of their children by being a father and mother to them; raising and training to resemble their God.

Subduing the earth and reigning over it.

In subduing the earth and reigning over it, and in particular over the fish, birds and animals, they were to see themselves as rulers over all of creation and had to positively take up that position of authority.

It is difficult to visualize exactly how they were to accomplish this, as all of creation was in complete harmony; a place where all the animals lived according to their God given instinct without need of being taught what to do or how to behave. They were not damaging the garden or harming one another. God, however, does nothing without good reason, therefore, in one way or another, they had to start giving effect to this command.

(Perhaps they exerted their authority by sending the monkeys up the trees to pick and bring them the ripe fruit which they could not reach – my imagination!)

For us, the importance of this instruction lies in the fact that even under these perfect conditions, God worked within the framework of structures of authority.

Therefore, structures of authority within marriage, the workplace, the country etc. are from heaven; they are quite normal, healthy and the logical way to set up a peaceful and flourishing society.

If a person finds it difficult to submit to sound rules and regulations, he has a rebellious nature and must seek God’s help to overcome it. Some nations are ruining their countries because every citizen wants to rule, and few are willing to submit.

(Oh, may the Lord grant us leaders of countries that will have the ability and integrity to make their Creator happy and proud!)

(Was it God’s intention for human beings to rule over one-another once they multiplied? This is a very interesting question but too complex to discuss right now.)

Linked to the enjoyment of the wonderful garden, came the responsibility to maintain and further develop it. They had to look after the garden, so the garden would look after them. In doing so, they would harness and apply their built-in abilities and find fulfilment in the process. The garden would yield an abundance, sufficient to supply in all their needs as well as in the needs of their children that would later on be born.

Let us compare their carefree lifestyle with ours and consider the term, “Human rights,” which forms an important part of our present-day concept of human interaction and is a principle ensconced in the constitutions of many countries. It is interesting to note that it is nowhere stated that Adam and Eve had certain human rights because they were human beings and yet they were much better off than us.

“Human rights” is something which man had to draw up and implement, because human beings no longer love and respect one-another.

In the Garden of Eden there was only one law, the law of love. The two human beings had to love their Creator, one-another and the rest of creation. They had the privilege of being looked after by a loving God and they had the responsibility of doing His will. This way of living would ensure them a peaceful and blessed life.

Christians would do well to live according to this higher principle. If you love your neighbour as yourself, like Jesus taught, he will never have to take you to court for infringing on his rights.

Man benefited more by his privileges than we gain by exercising our human rights. Adam never had to fight for his privileges; he enjoyed them because God, His Creator, was a good God, a God who had an abundance of everything and showered His “son” with his abundance. Christians should rather seek to please their Creator, then receive an abundance of blessings from Him, than to fight man for their rights. Resorting to violence is not God’s way of living; rather take your request to Him in prayer and patiently wait on Him to supply what you need.

The fact that man had to guard the garden, implies that it was threatened; as we will see in due course, this was indeed the case.

Adam was to name the animals.

Let us take a look at man’s daily life as it was right at the beginning. We may sometimes think how wonderful it would be to be so rich as not to have to work for a living, but to be able just to sit around all day, following the sun around the house as it travels from sunrise to sunset.

That is a false assumption. When we first meet God in Gen 1:1, we find Him at work, creating the universe and as soon as He had created Adam, He gave Him a job to do, namely to give names to all the animals which the Lord had created. God actually did the hard work. He brought the animals to man to be named, then let them go to return to where He had found them.

Man must have been very intellectual, although He had not been to school or to university, for he was able to give a fitting name to each and every creature and every time he came up with a name, God approved of it. God would perhaps say, ‘Wow! Well done. A very fitting name!’

His Creator had done His job of creation of the universe very well and the man He created in His image, was doing just as well. We have a saying, “Like father, like son.” Man made His Father happy and proud.

When God approves of the work we do, we can really feel at peace.

To realize what a difficult job man had, just select any three animals and try to give them entirely new names! Nowadays for us to find suitable names for new discoveries, takes considerable resourcefulness, studying the object’s appearance and application and formulating an applicable word. Adam thus had to be quite an intelligent person. In doing so, he also further expanded and developed man’s (his) language.

Perhaps Eve would help him in naming the animals – while he would name the Big Five (elephants, lion’s, etc.) and the like, she would come up with suggestions for the doves, rabbits and squirrels. But that is just my imagination!

Using both body and brain.

They used their bodies to bring forth children and their intellect and creativity to name the animals.

Performing their duties would bring them into closer contact with His handiwork. As highly intelligent beings they would be fascinated by the excellence of every tree, shrub, flower, fruit, bird and fish. They would inspect these intensely and be convinced of His glory, love and wisdom.

A journey to yesterday

What an exhilarating experience it would be, had  we been able to travel back in time to spend a day with Adam and Eve in Paradise – for the child of God an even more wonderful Paradise is waiting for the Lord promised the robber on the cross, saying, “Today you will be with me in Paradise”. Hallelujah.