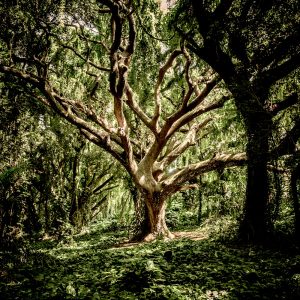 To be able to test someone, there has to be a rule by which the person can be measured. God gave only one law in His Kingdom and that was concerning the Tree of Knowledge of Good and Evil. Man was not allowed to eat of it; should he eat thereof, he would surely die. The answer was not complicated; just a simple yes or no.

The name of the tree could imply that evil already existed which indeed was the case for at that time, a number of God’s angels had already revolted against Him (Rev 12:7-9). They were allowed to visit the earth at will.

Every king rules in his own way and makes his own laws. More than one king would cause division amongst the citizens and result in war. They had not yet chosen Him as their God and King.

Man was to be, not only a son to the Father but also a bride to the Son of God – a faithful, loving bride. If a man forces a certain woman to marry Him, how will he ever be certain that she loves him or that she will remain faithful to him?

That was the problem with Adam and Eve; God created them because it was His desire to do so; they had no say in the matter and only became aware of themselves once they were created and became alive. They had not yet chosen Him as their Bridegroom.

It therefor makes sense for Adam and Eve to have chosen their Creator as their one and only God. Let us express it in modern idiom: they had to “vote” for Him; to draw their crosses behind His Name.

The way in which they were to “draw their crosses,” was by deciding whether they would obey him by not eating from the forbidden tree. That would be their vote of confidence or of no confidence.

Actually, this was a very easy test because they were free to eat and enjoy the fruit from any of the many trees and the many varieties of trees, and they were only forbidden to eat the fruit of this one tree.

Possibly a long period of time had passed by during which they had been seeing the tree with its fruit but had not stretched out their hands to pick the fruit and eat it, until one day …

The snake was craftier/more subtle/wiser/more cunning /shrewder than any of the animals the Lord God had made.

The snake, when he was created by God, was not crafty, he was good, for God created no evil; his wisdom turned into craftiness when the sly devil took possession of him and used him as an instrument to accomplish his will.

In fact, at that stage, he was gifted by God with mental abilities above that of all the other animals, abilities approaching that of man. Could he perhaps even reason and speak man’s language so that Eve did not find it strange when he spoke to her? Perhaps he had done so before.

He definitely had legs to walk by, on all fours or even upright, for God stripped him of these as a punishment for sin (3:14). Taking into account that the devil, before he fell from grace, had been the most glorious of all God’s angels (Eze 28), the snake probably was the most beautiful and admirable of all of the animals, surpassing them in bodily beauty and in the kingly air and majesty in which he conducted himself.

But suddenly another creature entered the Garden, a creature from another world, the devil. Where did he come from? The answer is found in Rev 12:7-9 where we are told of an uprising of some of the angels headed by the leader of the angels that had taken place in heaven. They were defeated and cast down upon the earth.

To learn more about him, we have to read through the Bible, starting with 1 Chron. 21:1 where he is called satan and following through the New Testament where he is referred to as the devil, right up to the book of Revelation. He is the leader of all evil spiritual beings that hate the Lord and fight against Him.

In Revelation 12:9 he is described as:

“The great dragon …- that ancient serpent called the devil, or Satan, who leads the whole world astray.”

From Ezekiel 28 we can deduce that it was because of his pride, that he was condemned and cast out of the presence of God.  He then descended to the earth, filled with fury and intent on destroying God’s creation (Rev 12:12) – more about this later on.

The devil used the snake, the most glorious of all God’s creatures, to gain entrance into the Garden in an inconspicuous way. Whether he took on the form of a snake or whether he entered into the real snake, is not disclosed to us. The fact that God cursed the snake (the animal) and that the curse is still visible in him till this day, indicates that some guilt had been found in him; perhaps he had allowed the devil to use him to deceive Eve.

Before we look at the devil’s question, let first us go back in time, stand next to the forbidden tree, see Eve approaching and ask her a question or two:

“Hi Eve! What are you doing here today, here at the forbidden tree? Are the fruit of the many other trees no longer delicious and good enough for you? Are you perhaps walking around, wondering what is actually wrong with the fruit of this tree? Why are you here alone; where is your husband whom you are supposed to assist?”

(Let us learn from Eve’s folly to keep a safe distance from everything that is tempting.  Scripture warns us to flee (run away) from evil, 1 Tim 6:11).

See how sly the devil is: his first move was to get Eve to talk to him. He does this by asking her a question. His question sounds quite harmless, as though he, being a resident of the Garden, only wanted to learn more about it and its administration.

Part of God’s command to the married couple, was to take care of the garden/to guard it. This meant that they had to be on guard, alert. Eve failed to do so.

She should immediately have asked herself: “Why does he want to know this:  what is his reason?” Then she should have come with a counter-attack by asking: “Why are you asking this? What has this to do with you?  You are an animal for which God provided its own food; God’s command to us has nothing to do with you.”

Had she asked those questions, the devil would have been placed on the back foot, and she would have been out of the corner. He would have been the one required to answer questions. But alas, she did not do this, and the ice was broken for the devil.  The snake had won the first round.
When God’s Word is clear about a matter, we must not argue with people who dispute it. All we have to do, is quote Scripture and leave the issue at that.

This was not really what God had said. He said: “You’re free to eat from any tree in the garden/you may freely eat of/from every tree in the garden, …” (2:16). God’s words emphasized the generosity of His gifts, whereas, her words were a sort of watered down “Yyyeess, we may eat from certain trees but from … we may not eat …”  There is a lack of gratitude towards her Creator for the wonderful, undeserved gifts He had bestowed upon her.

Ingratitude for all that God has given a person, makes him move closer and closer to the forbidden tree. Secretly, he wonders if a little piece of disobedience won’t, maybe, make him happier. No, the road to fulfillment lies in raising one’s hands towards heaven in gratitude because the Word says:

“Delight yourself in the Lord and He will give you the desires of your heart.” (Ps 37:4).

Then the snake said to her that she would not surely die but that God knew that when she would eat of it, her eyes would be opened and she would be like God, knowing good and evil.

The woman’s feeble reaction was like fat on the devil’s fire and his attack grew more vehement. His attack was not so much aimed at the woman, as at God Himself; he questioned the openness, the well-meaning of God and the goodness of his deeds and argued that He withheld the best from mankind.
He maintained that the power to know good and evil was a special ability that would put mankind on an equal footing with God; therefore, he said, by withholding this knowledge from them, He was reserving his best for himself and that they could therefor not entrust Him with their lives and future, but were to rise up and claim this ability for themselves, because it was their right and within their reach.

He did, however, not explain to Eve what the knowledge of good and evil really meant and what consequences it held for them.
Young people are especially vulnerable in this area of their lives and are easily persuaded that grownups, especially their parents, are withholding the best things in life from them. It is only once they had eaten the forbidden fruit, that they discover for themselves the bitter consequences and the sound reasons why it had been withheld from them.