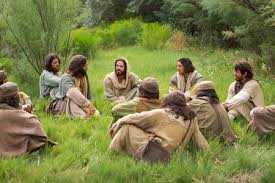 AN AWESOME THING HAPPENED ON EARTH

Some time before you and I were born, an awesome thing happened on this earth where we as human beings are living. The Creator of our planet decided to descend from his heavenly home and live amongst us as a human beings for about 33 years. Let me be more precise: God the Father sent his Son, God the Son on a special assignment which no one else, not even the holiest of his angels could perform. He was born and grew up like any other child, studied, worked in his earthly father, Joseph’s, carpenter workshop in a small town called Nazareth, in the land of Israel.

THE DISCIPLING MINISTRY OF THE LORD JESUS CHRIST

At the age of thirty, He left his parents’ home and launched out into the ministry for which He had come to earth. Thousands of people flocked to see Him do mighty miracles like opening the eyes of the blind, strengthening the muscles of the lame so they could walk again, even raising the dead and multiplying a few bread rolls and some small fish to feed thousands of men. Most of these people went home and reported excitedly what they saw, then continued with their lives as before.

A smaller number returned to listen to His teaching. They did not so much need food and healing, but needed the things of the inner man. Their hunger was an unseen, but greater hunger, the hunger of the heart for peace and joy. They longed to be set free from the inner pain we all experience in this life, sometimes because we did wrong and have to bear the consequences and at other times because others  have no love for us and hurt us in many ways. Some of them were rejected by their parents, husbands, wives and friends. They also longed to be set free from the strong desires of the flesh like sex, use of drugs, anger and even demons that had taken over the control of the lives and against which they had no power. They were drawn to Jesus because, in Him, they saw a holy Man, a Man far more holy than even their spiritual teachers who were too weak to live according to their own teaching. They were also drawn to Jesus by the sweet yet powerful words He spoke, so they put aside time and made effort to attend His meetings, listened to His teaching and discussed what they heard with others that were like minded.

But even amongst this group there were many that would not commit their lives to Him, that is to follow His example in holy living according to his teaching. They began to realize that some of their sins were deeply rooted and to allow Jesus to uproot them, would be painful like sitting down in a chair and allowing the dentist to extract a badly rotten tooth before you can be free from pain and enjoy your plate of food. So, they said “No, no, I am Ok, I have my church. Let the ungodly go to Jesus. I have no need of Him.” So, they returned to join the first group that were watching Jesus from a distance and listening to His words through the testimony of others.

But then there was a third group, a smaller group, that realized that there was no other choice than to choose Jesus. They came to the firm conviction that they had no other person to go to, to be helped, for Jesus alone had the words of life. Many of them actually left their jobs and followed Him all over the country. Others were not so fortunate for responsibilities tied them down, for instance mothers that had their husbands and children to care for, but in their hearts, they had become totally committed to Jesus and would never stop following Him. This group of people He called His disciples. (From them He later selected His apostles.)

The question which you and I now need to answer is, “Am I his disciple or just his admirer? Do I go to church on a Sunday to clap hands for Him, then return home to live my own life?”

HOW I BECAME HIS DISCIPLE

Let me be honest with you: for almost thirty years, although being a member of a well-known church, I was not even his admirer, but secretly wished that Jesus or God the Father or God the Holy Spirit never even existed for my heart’s desire was to live a licentious (loose) life together with my friends. My need was for all sorts of worldly pleasures (or so I thought) without the dread of being punished for it.

But soon I discovered my mistake. The devil had put his filthy hand over my eyes so that I could not see the beauty of the Lord Jesus, the Son of God. The devil is the most cunning of all liars and had cleverly deceived me to think he was good and Jesus was bad.  He was holding a glass of beer under my nose, allowing me just one mouthful at a time while leading me step by step towards hell. Many of my friends were so deceived until they had no time left to run to Jesus. They died and were lost forever.

As for me, I discovered that to become a disciple of Jesus, was the best thing that can happen to a human being. This still is my experience: the longer I follow Him, the happier I get. Glory to His Name! He has so much patience with me, even when I sometimes stumble and fall, He picks me up, forgives me and encourages me to do better next time.

Yes, Jesus is continuing to make disciples. He is now directing this process of disciple making from heaven and He is not only calling people to become his disciples, but is also calling thousands of his disciples to assist Him in this work. Some He calls to be pastors and plant churches all over the world. Others, like myself, he calls to assist the pastors in their calling. For more than 10 years I was working in Mozambique, writing Bible study guides and assisting the pastors of many churches to present discipleship courses based on these study guides to small groups of members and had the joy of seeing hundreds of people becoming real disciples of Jesus.

THE “DISCIPLES FOR CHRIST” STUDY GUIDES

These study guides I am now having translated into as many languages as possible so that thousands of people that are unable to attend a Bible school, may still have the opportunity of becoming devoted disciples of Jesus and enjoy all the privileges in Christ which the Father has in store for them.

WHAT IS A DISCIPLE OF CHRIST?

What is a disciple of Jesus? It is a person that is surrendered to Him, an ordinary person that focuses on Jesus, who continually listens to and obeys Him and really ENJOYS HIM.

DO YOU WANT TO BECOME A DISCIPLE OF JESUS RIGHT NOW?

Are you saying that you want to become a disciple of Jesus right now, even before continuing with this course? That is the right decision. Please click on the following words: HOW TO BECOME A DISCIPLE OF JESUS . The link will take you to another study guide in which I will lead you step by step to make your desire come true. Once you have done that, you can continue with the course by turning to the page titled, “ DISCIPLES GROW BY BIBLE STUDY ” .

IF YOU HAVE BEEN BLESSED BY THIS STUDY GUIDE AND WISH TO SHARE IT WITH US,  OR HAVE ANY  REQUEST, QUERY OR OTHER COMMENT, PLEASE USE THE CONTACT FORM BELOW.