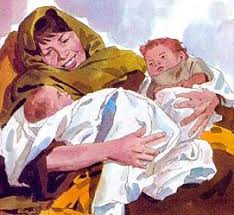 A. THE BATTLE FOR A BABY

The romantic honeymoon days of the marriage between Isaac and Rebekah, the fairy-tale of a beautiful bride from a distant country travelling with a caravan of camels to meet her very wealthy, longing bridegroom, awaiting her at sunset along the way, had long since passed. The excited couple had now been married for almost twenty years (25:20,26) and a dark cloud had drifted in and was obscuring their sunshine, because no child was yet born from this marriage.  What a disappoint-ment; what a trial.

The trauma which Abraham and Sarah had to endure for 25 years while waiting, praying, and believing for their first child, was now repeated in the lives of their heir and his wife.  Again, it was a drawn-out battle of faith that had to be fought to continue God’s lineage of believers.  The son to be born could not just be the result of a man and woman coming together and conceiving a child in the natural way; no, the child was to be conceived from the couple’s faith in God.

As pointed out before, this is a very important principle because it also applies to the second birth of a person when he trusts God to touch his barren “dead” spirit and generate a child for God by the Holy Spirit.

(Abraham and Sarah, Isaac and Rebekah, Jacob and Rachel, all went through this trauma, not only for themselves, but also for us who are, by faith, born again as spiritual babies).

Isaac and Rebekah’s was, of course, also a battle against the devil who, at all costs, tried to prevent God from raising up a nation for Him amidst the mass of unbelievers and, from that lineage, birthing the Messiah, the Redeemer of mankind.

Their faith also penetrated every facet of their lives, just as man’s second birth is only the point of departure of a long journey of trusting God.  Does not Scripture say,

Facing the challenge hand in hand.

Isaac did not leave Rebekah to fight this battle on her own.  He stood by her.  God created the woman as a help-meet for man, but there are times when she too, desperately needs the assistance of her marriage partner and then he must not blame her for being unable to bring her side, but rather follow Isaac’s example by praying for her.  Isaac also did not choose the easy way out by sleeping with a concubine but pleaded with the Lord to provide in the normal way. His was an intense struggle and God heard his prayer.

“Double for your trouble,” is the saying, but the double blessing lead to more trouble. Rebekah, after the long wait, expected nothing less than twins, more than what she had hoped for.

Did she realize this? As it often is with such pregnancies, she experienced much discomfort.  For some time, she went around, complaining about her lot, in the end concluding that it would be better for her to die (as some translations have it), than to continue suffering like that.  A couple of months before, she had stressed because she could not conceive a child, now she was complaining because of the price she had to pay for the privilege of holding a baby in her arms.

Coping with the challenges of life

Even for a believer, life will always have its challenges; the one has not quite passed, when the next is upon us, like the waves of the sea that tirelessly keep on rolling in and breaking over you.

What are your options? Running away to go and bask in the sun on the beach is not an option; spiritually speaking, that means quitting altogether.

A better option is to learn how to dive underneath the wave where the water is quieter, then pop up on the other side with the wave breaking behind your back. Even better is to learn how to use a surfboard, then use the very waves to bring you hours of joy as you speed effortlessly on their crests. The accomplished surfer is continually on the lookout for great waves (Please read and meditate on James 1:1-4 to understand more about this uncomfortable truth).

Rebekah apparently was more of a manipulator than a surfer (27:5-17); investing her efforts in changing the waves of life rather than using its adversities to change her inner self. According to some translations she sometimes thought of rather dying than improving her life skills. Even later, in her middle age, she was still stuck in the same place and could not cope with her daughters-in-law (27:46).

We must do ourselves a favour and learn some spiritual surfing skills, then life will be so much more fun and as other Christians see you riding the waves, they will implore you to share the secret with them.

Rebekah came to the end of herself

Flesh and blood can only endure that much and no more. Eventually, she could stand it no longer and went to inquire from the Lord regarding her problem.

We should pray more and complain less; choose the shortcut of prayer above the roundabout route of complaining to everyone around us. In a small group meeting of believers, when opportunity is given for prayer requests, believers would each explain their need in detail, but when opportunity is then given to pray for these needs, the room falls quiet, which seems to indicate that believers are more comfortable in complaining to one another about their needs than praying to God about them?

Where did she go to consult the Lord?  Could it be that she had traveled to Salem to discuss her problem with Melchizedek (14:18), the King of Peace/king of peace, the Priest of God/ priest of God?

Rebekah got her answer

The Lord answered her right away.  It almost is, as if He had been waiting for her to come to Him, because the two boys to which she would give birth, would play significant roles in the history of mankind, and He wanted to disclose this to the couple, so that they would know that He was in charge and was ordering their lives.  He said to Rebekah she was expecting twins and that the elder would serve the younger.  He also prophesied that they would grow into two nations.

Let us note that nothing is being said about God lessening her discomfort, but He gave her insight into the role she was playing in fulfilling His plan. He also told her that both boys would live, grow up and in turn father children of their own.  This gave her the courage to bear her ordeal to the last. (Before hearing from God, she must have been very tense for it was her first child, her long awaited child, and the symptoms she experienced, could be interpreted as that all was not well with the development of the infant. Uncertainty that leads to fear is an enemy of health and joy.)

At last the sons were born.  The first born, Esau, was covered by a mantle of red hair.  Right from birth he portrayed a “macho” (hyper manly) image.  As could be expected, he developed into an exceptional hunter.  To him hunting was not just a way of putting food on the table, but rather a sport, a thrill to quench his desire for adventure.  He makes one think of the wild Nimrod who was a mighty hunter but also a very violent man (Gen 10:8, 9).

The battle between two kingdoms

(Esau’s descendants, the Edomites, (the word means red) in due course settled to the south and east of the Dead Sea. When the Lord, hundreds of years after this, gave the land of Canaan to the posterity of Jacob, He did not allow them to attack the Edomites, although they had refused to let them trek through their land.  Later on, they became bitter enemies to king David.  In view of this enmity that developed between these two nations, one wonders if it would be stretching Scripture revelation too far by saying that, that struggle between the two patriots had already started within the womb, causing so much distress to Rebekah? (Some Bibles translate 25:22 as that, in the womb, the two sons, “struggled against each other” or were “fighting together”.

The ongoing battle between the Kingdom of Light and the kingdom of darkness knows no boundaries.)

Jacob, the baby with a bad name

The second born was called Jacob (Deceiver) because he had at the time of birth, laid hold of his brother Esau’s heel.  Was he called so because God had said that the deceiving snake, the devil, would bite man in the heel?  Or could it have been a prophetic word spoken by Isaac?  Whatever the case might have been, Jacob had later in his life, stood up to this name by defrauding both his brother and his father.

What was pleasing in his life, on the other hand, was that he was a peace-loving man who fixed his attention to the daily tasks of supplying in the needs of the family; a man on whom you could depend.