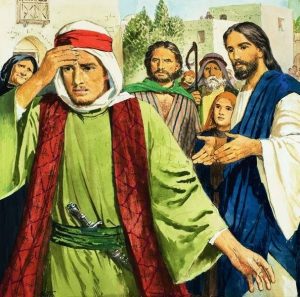 A. A short-sighted rich man

In a previous portion of Scripture, we read about a rich man who focused so much on his possessions, that he failed to give any attention to eternity. His sudden death caught him off guard with the result that his soul was lost forever.

B. A far-sighted rich man

Here we have another rich man, a young man and he was indeed searching for God. He did not wait for someone else to approach and implore him to turn to God, no, he went in search of Jesus. In Mark 10:17 (read with Matt 19:16) we read that as Jesus was leaving town, this young man came running to Him and, falling to his knees before him, called out, “Good Teacher, what good thing must I do to inherit eternal life?”

Before we decide on what other shortcomings he had, let us look at the good things he already had built into his life.

D. He looked and strived for things beyond his present earthly life

Firstly, we see a young man who realized that a person’s existence does not end at his last breath, but that after death, an eternity of existence still lies ahead. He also realized that it was only God, that could tell him, without a shadow of a doubt, how to obtain Eternal Life; in other words what to do to ensure eternal perfect righteousness and joy in God’s presence.

Young men seldom ask such profound questions; they are more inclined to pursue the pleasures of life.

E. The light that he had already received from God, he followed to the letter

He was exceptionally privileged to have grown up as a Jew who, from childhood, had been taught the Torah, the five books of Moses, and the Prophets and this seed had not fallen onto deaf ears. No, he lived according to it to the best of his ability. When Jesus recited a whole list of commandments which he was to obey, he could look Him in the eye and confirm that he had been doing those since childhood. He would of course, if asked, had admitted that he was prone to human failure. What he meant was that, as a human being, he had been following the commandments to the best of his ability, and that his kindred knew and respected him as a pious person.

F. He had made his mark in life

Even as a young man he prospered materially while many of his contemporaries might have been battling to find their feet. Prospering in life usually is an indication of ingenuity and hard work. A slothful and spendthrift person gets nowhere.

On top of that he seems to have had the ability to take authority over members of his community because in one of the English translations he is called, a rich young “ruler.”

G. He was a humble man

Although he himself was a ruler, he saw in Jesus a leader infinitely greater than himself, so great that he even fell down on his knees before Him, pleading to be taught. In his study of the Scriptures, he had come to realize, not only how great and glorious God was, but also how infinitely small he was, lacking in the knowledge of the ways of the Lord.

In Jesus he saw someone who clearly had a particularly close relationship with God. That is why he did not reject Jesus as the Pharisees who considered themselves full-fledged in knowledge and experience of God. He recognized that he fell short of godly light, ran up to Jesus, fell down before him and called out, “Good Teacher (Master), what must I do to have Eternal Life?”

(Perhaps we should just add here that the reason for his uncertainty was the fact that the Holy Spirit did not witness with, and to his spirit, that he belonged to God, because he had not been born again (Rom 8:16)).

In Mark 10:21 it is recorded that Jesus looked upon him and loved him. Jesus, as the Son of God, naturally loves all people, but this young man’s sincerity and humility touched Him deeply. It was seldom that such an upright, respected, humble man sought advice from the Lord.

I. Jesus gave an unusual answer

Jesus so much wanted this good, young man to have Eternal Life, that He gladly told him what to do saying, “There is one thing you still need, sell everything you have, give it to the poor, and you will have a treasure in heaven. Then return and follow me.” Jesus did not just give him the usual pat off answer on “How to get saved,” but, lead by the Holy Spirit, He looked right through his words and actions and saw an X-ray and sonar of his heart. What He saw within his spirit was the ugly, cancerous tumour of love for the world. Like a capable surgeon He ordered it to be removed without delay.

The young man had asked his question and received his answer directly from the mouth of the Son of God. It left him with no doubt at all. Unfortunately, it was not the answer he had anticipated.

J. The price of Eternal Life was too high for him

One would expect that he would jump up, filled with joy and be off to do as ordered so as to receive Eternal Life but, no, he was terribly shocked. A dark frown of sorrow covered his face. He could not believe his ears. He had expected that he only needed to do one more small thing, just one little candle on the beautifully decorated cake of his life. Now he heard that he had to get rid of the cake itself.

The very things for which he had sacrificed so much and had worked so hard: his precious possessions, his exquisite luxuries, his social standing and security, all these he had to give up to receive Eternal Life. He stood dumbfounded before the Lord, his jaw dropped, he licked his dry lips, then turned and with eyes downcast, walked away, on and on he alked, without ever looking back.

You see, this young man loved his possessions dearly. He did not just hold them in his hands but hugged them to his heart. His wealth owned him. He was a slave, shakled to what he had accrued. To him it was unthinkable to sell everything, “squander” the proceeds on the poor, then follow Jesus wherever He would go. What a sacrifice! He did not want to have his earthly possessions transferred to heaven to be enjoyed in the remote future, no, he wanted to enjoy them here and now.

Neither did he desire to be with the Lord Jesus continually, wandering with Him all over the land. That certainly was not his idea of a life to be coveted no, he wanted to be surrounded by his possessions and servants, enjoying life day by day.

What is more, he did not trust Jesus to supply in all his needs while following Him; his property was his security; the coins tinkling in his pocket and purse made him to relax.

That is why hell is not filled with bad people only; a considerable number of its occupants are “good ones,” people that did not murder, rob, sleep around, get drunk but merely held too tightly onto their material things, so tightly that they could not open their hands and hearts to receive Eternal Life.

M. “Not all that glitters is gold”.

I once watched a video on an eagle that dived down on a dead animal floating down a river. The bird sunk its claws into the prey, then tried with all its might to lift off into the sky but could not do so for the carcass was frozen and very heavy. At last it realized that its effort was futile and let go, but its claws had become frozen into the body and its frantic beating of its wings was to no avail. Its greed had caused it to hold on too long. Now it was too late. Seconds later, bird and carcass went over the waterfall and the unwise beautiful ruler of the skies lost its life. Greed was its undoing.

We must explore earthly beauty  with heavenly wisdom. Some attractions are nothing but dead carcasses and as we wrestle to make them our own, we become part of them. It is so that the competition to earn a livelihood is severe and we must  work hard to put bread on our tables but, in doing so, we need to listen closely to the warnings of the Holy Spirit, because that which looks good from afar, can be bait that the devil puts out for you.

The bright side of it is that although, as Jesus said, it is difficult for a rich man to be saved, nothing is impossible with God. Praise Him.

Jesus realized that this incident and teaching shocked His disciples posing a real challenge to their faith. That is why he immediately directed their focus to the positive side of giving up one’s earthly possessions, saying, “I tell you the truth: no one who leaves his house, or wife, or brother, or parents, or their children because of the Kingdom of God does not receive more reward in this life and hereinafter eternal life.”

What He says is that the reward to follow Him, already begins in this life. Therefore, let us be encouraged and follow our Master with hearts full of joy for then we will be blessed in this life as well as in life hereafter. There we will be where Lazarus and Abraham also are, yes where God Himself is forever present.

SHOULD YOU HAVE ANY COMMENTS OR QUESTIONS, PLEASE USE THE FORM PROVIDED BELOW TO COMMINICATE WITH US.

THIS DOCUMENT MAY BE DOWNLOADED FREE OF CHARGE FOR PERSONAL USE.